Decision Time for the Bruins

The past couple weeks have been, strange, to say the least, for the Bruins. Their outstanding start has started to level off, maybe even decline. The schedule sped up, and games have been jam packed into the weeks. Injuries have plagued the team, causing many different guys to suit up and play. The B's "got" Jarome Iginla, and then didn't. And yet through all of this, hockey has been played, at very different levels and styles of play. One thing that has been consistent throughout the stretch, is the growing idea that there needs to be change, perhaps a big change. Now, after all of the Iginla rumors that never came true, nobody really knows what's next, including Bruins GM Peter Chiarelli. It seems as if every rumor that comes along is shot down (cough cough Pittsburgh), and with the trade deadline just 5 days away, the Bruins may be running out of time. Chiarelli knows this, and has acknowledged his options, admitting that he must be creative if the Bruins hope to improve before the April 3rd deadline(1). Perhaps the B's will do something big, but then again, maybe they won't. The timeline for change is getting shorter, as are the amount amount options. So for now we have to sit, and wait, and hope that the play improves while more talks go on behind the scenes. This is decision time for the Bruins. These next few days may be the deciding factor on how the entire season rolls out. They've hit a rough patch, and they need to try to pick themselves up again. 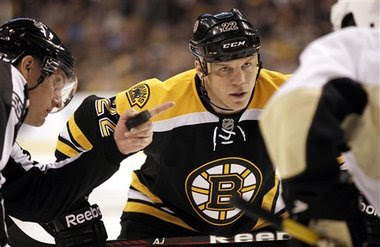 It all depends on whether the Bruins can recapture what they started earlier this season, with or without a big trade. They need to focus on what's happening on the ice, and let Chiarelli and his team do the work behind the scenes (having a head coach like Claude makes that a lot easier). Well, it's go time for the B's, because this stretch will be the deciding factor as to what happens throughout the rest of the season. sources: 1. http://nesn.com/2013/03/peter-chiarelli-admits-he-must-get-creative-as-bruins-need-to-improve-becomes-more-pressing/ , http://media.masslive.com/bruins_impact/photo/10594887-large.jpg
Unknown3/29/2013 09:18:00 PM
Share
Post a Comment
Newer
Older