Keys To The Game Vs Flyers

The dust is beginning to settle from the fallout of one of the craziest nights in recent Boston hockey history. The Bruins played a crazy game against Montreal while trade winds blew into a all out hurricane. The Bruins had aquired Jarome Iginla.

Untill 2 AM. When reports came out that Jarome went not to the Bruins but to the Pittsburgh Penguins. Most Bruins fans were sleeping. Happily sleeping, even after a loss to the Habs, because Chiarelli made a much needed trade and the Bruins got an elite veteran. But they didn't. Pittsburgh got him. They got Iginla and they got Brenden Morrow.

The Bruins got nothing. With Iginla, Morrow, and St. Louis off the block there isn't much left on the market for the Bruins. Reports have began to swirl of perhaps Ales Hemsky and Ryan Whitney. The giant one eyed Swed' (Carl Soderberg) is still a possibility.

As of now, Claude and the Bruins have to power on. The Bruins are still one of the top teams in the east and will make the playoffs. Pittsburgh will be dealt with later, and most likely in the playoffs, now the Bruins need to turn their attention to the Philadelphia Flyers. 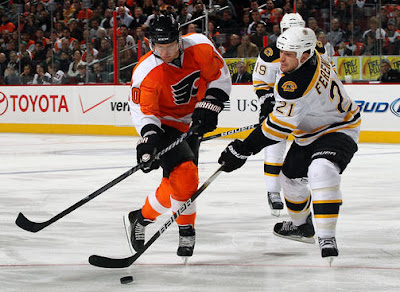 The Flyers have struggled all year and are last in the Atlantic Conference, behind the Islanders. The reason for the Flyers struggles? Well take into account that the Flyers only have two players with a positive +/- (Fedetenko +5 and Tye McGinn +1). The Flyers havn't played defensivly like in years past and are struggling because of it.

On a sidenote the Flyers also arn't great at managing cap and will probably need to move some cap around. Fedetenko has already been involved in rumors, including rumors involving Boston, but now more expensive players on the Flyers like Danny Briere are also rumored to be on the trade block.

1) Stay Focused. The Bruins are in the toughest part of their scheduele both physically and mentally. As the trade deadline approaches Bruins players arn't as untouchable as they used to be. Guys have to start to be wondering if their play has been good enough. The Bruins have to focus on what's happening on the ice instead of off it, no matter how hard that may be. One of Claude's best coaching attributes is getting the team to perform when they need to. When both he and Chiarelli's jobs were on the line, he coached them to a Cup victory, all while Felger and fans were calling for his head.

Claude needs to do whatever he did then, now. The Bruins arn't playing with enough energy.

2) TOI. The time on ice when it comes to the Bruins is almost always even between the top 3 lines. But with Horton struggling and Krejci and Lucic incosistent as ever, it's time to play the most talented line the most. It's time to play the Bruins top goal scorer, Brad Marchand, the most. It's time the most explosive and talented Bruin, Tyler Seguin, get the most time. Seguin only had 14 minutes of ice time against the Habs. The same amount of time on ice as Rich Peverley. Claude needs to give the top line 20 minutes a game, at the least. Seguin, Marchand, and even Bergeron are all young guys, they can handle it. 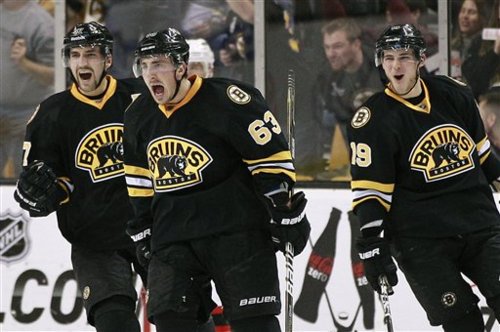