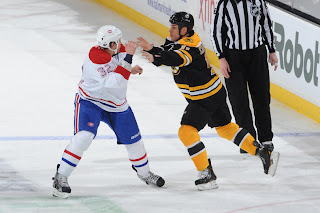 Not the result Boston wanted, but credit to Montreal for sacking up and rallying the troops for two late goals to bring the game to overtime. The Habs took the game 6-5 after a shootout victory.

The Bruins found themselves down 2-0 early in the second period before the Bruins erupted for 4 straight to the tune of Dougie Hamilton, Brad Marchand, Patrice Bergeron and Nathan Horton.

The third period started as former Bruin, Michael Ryder put his second of the game in cutting the lead to 4-3. The Bruins quickly answered on a Tyler Seguin breakaway. Seconds later Brendan Gallagher scored for Montreal and with time winding down and on the powerplay the Habs found the back of the net to send it to overtime and eventually a shootout where they won after 6 rounds.

The Bruins outshot the Habs 41-28, playing sloppy hockey for the first period and early part of the second before turning up the heat. They took the lead for granted and got caught up in penalties that eventually bit them in the ass.

Newly brought up defensemen, Torey Krug played a decent game finishing a -1 with an assist on the Patrice Bergeron powerplay goal in the second period. He was the victim of screening Tuukka Rask on the second Montreal goal by P.K. Subban as they went ahead to a 2-0 early lead.

The Bruins scored 4 unanswered goals after they continued their trend of going down quickly. Then they blew a lead late in the 3rd, another trend that they need to fix.

Among the action, news was brewing that the Bruins were in the process of completing a trade with Calgary for Jarome Iginla. As of now the rumors are saying Matt Bartkowski, Alex Khoklachev and a 1st rounder.


Bob McKenzie on TSN: #Flames and #Bruins close on Iginla deal. Deal is believed to be Matt Bartkowski, Alex Khoklachev and a 1st for Iginla.
— James Stewart (@JamesStewart81) March 28, 2013


Make of this what you will: Bruins scout was overheard at an NHL rink tonight saying Iginla deal is 100 percent done & he's going to Boston
— Joe Haggerty (@HackswithHaggs) March 28, 2013


Who knows what is going on, but things should be clearer as the weekend approaches. Nevertheless, tough loss for the Bruins, they get a couple of days off before traveling for a back-to-back in Philly and Buffalo for the weekend.