For the first time in a while the Boston Bruins played a very solid game defeating the Tampa Bay Lightning 2-0. It was only the Lightning, but based on the Bruins recent play, a solid win is nothing to scoff at.

The Bruins saw goals from the German hammer Dennis Siedenberg and from the true 7th man Daniel Paille. Yes, the 7th man award was awarded, and went to Dougie Hamilton. Diehards can thank the Pink Hats of New England for that one. 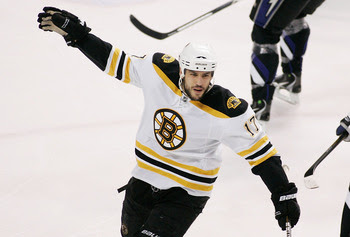 The game was a bright spot in a recent string of poor play from the Bruins though. One key figure in particular stepped up and contributed and that was Milan Lucic. Lucic looked as physical as he did a few years ago. He didn't just get one hit and then just dissapear. No, this time Lucic got multiple hits and destroyed Kieth Aulie in a fight. It was good to see the old Lucic again and he is the key to the Bruins winning in the playoffs.


Goalie Tuukka Rask shutout the Lightning which isn't easy to do. Even though the Lightning are bad they still do have steven Stamkos. Rask stood on his head all night and made the best save of the season on Stamkos. Nothing would help the Bruins more in the upcoming playoffs than a hot goal tender and Tuukka Rask has a shutout in his last two starts. Will it reflect in the playoffs? Hopefully.