Keys To The Game Vs. Pitt

The Bruins play the Pittsburgh Penguins today after the game was postponed yesterday. The game was postponed because Boston was winning one for America and the Western world. The Boston Police Department, other local police Departments, federal agents, the US Army and the SWAT captured one terrorist of the Boston Marathon bombing alive and the other was killed in gun fire. Three other suspects where taken into custody in New Bedford.

With what looks to be the worst behind Boston it's time people started trying to get back to a Boston normality yet again. For a lot of people that means sports. The Bruins have probably just gained tens of thousands of casual fans for the time being. And the Bruins want to take on a big roll in the healing.

It also adds yet another reason for the Bruins to play hard today and for the rest of the season. Today the Bruins have a ton of reasons to play their hearts out. For today's keys to the game I'll list the numerous amounts of reasons and if there are new casual Bruins fans reading this today, it'll give you an idea of what to look for.

1) Playing For Our City. The most obvious reason the Bruins should play their hearts out is for Boston. Emotions are running high in the city and the Bruins players feel it. Not only do they feel it but most of the team has embedded themselves in the city. They love it here. Player's like Andrew Ference, Shawn Thornton, Nathan Horton, and Milan Lucic have taken to calling Boston their home. It's a part of them. No one wants to see their home attacked and it should give them motivation to skate and play hard.

2) It's Pittsburgh. For the first time since the trade deadline the Bruins have a chance to get back at the Penguins for taking their players. The Bruins first tried for Brendan Morrow but then the Penguins ended up with the better offer. The Bruins then turned their attention to the top player on the block Jarome Iginla. It was reported that the Boston Bruins traded for Iginla but overnight reports spewed out that he was actually going to the Penguins. It was a dirty move by the Flames and a self centered move by Iginla. The events really sparked a hatred from Bruins fans to the Penguins organization. A hatred that reflects in the locker room as well.

3) Söderberg! Diehards from past years refer to him as the yeti and some refer to him as the giant one eyed Sweed. Whatever you call him Söderberg was the best goal scorer in the Elite League and finally agreed to sign with the Bruins and play in the NHL for the first time in his career. Years ago the Bruins traded the goalie bust Hanu Toivenen for the negotiation rights to Söderberg. Now he will actually play! A new piece to the lineup that if Claude puts on the right line can shine. On a side note Claude Julien finally did what was right and Milan Lucic will be scratched from tonight's game as he's struggled all season. 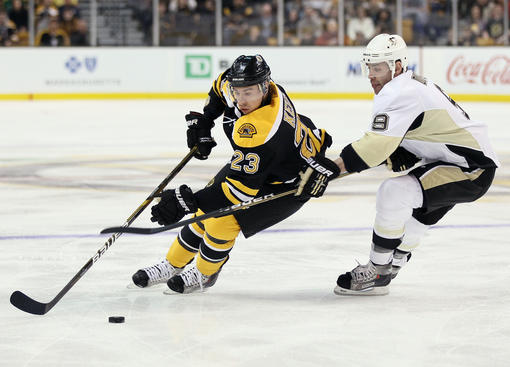