Soderberg Refuses to Play in World Championships and Other News 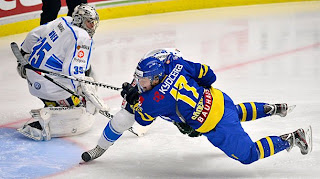 NESN According to Dominic Tiano of OHL Writers, Carl Soderberg, who reportedly wasn’t granted his release from his Swedish league, has refused to play for his Sweden in the World Championships. Despite Soderberg’s refusal, Sweden’s general manager Tommy Boustedt doesn’t see the deal settled quite yet. “I suspect that the [Bruins] want to proceed with [the Soderberg] matter. I don’t see it as settled yet,” Boustedt said, according to Mattis Ek of SportExpressen.se.

This whole situation is a mess. Soderberg finally wants to come to America and help the Bruins, but the Swedes won't allow his transfer because they want him to play for the World Championships. Now Soderberg tells the Swedes he won't participate.

It will be interesting to see what the Bruins do the next couple of days, since if they want Soderberg to play in the playoffs he will need to at least play in one regular season game.

If Soderberg doesn't come over this season he will most likely be coming over in the fall to start the 2013-2014 campaign, giving him a whole lot more time to adjust to the NHL game.

Also, news today states that Patrice Bergeron will be traveling with the team to Carolina but won't be playing. He has skated with the team the past couple of days and hopefully will be back in the lineup at the start of next week.

Brad Marchand has sustained a mild concussion which will most likely sideline him for a few games. At least the team is getting the gang back together and taking these injuries seriously. Better to be healthy for the playoffs than risk a players health for a couple of regular season games.

Bruins are back at it tomorrow night down in Carolina hopefully they put on another offensive show.