Bruins Have to Drop the Hammer and Finish the Leafs 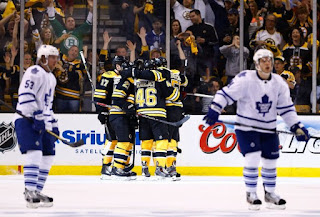 What the Bruins did to the Maple Leafs at the Air Canada Center was nothing short of a nightmare come true for the Maple Leafs fan-base. Wiping out a two goal deficit like it was nothing, playing rock solid for the remaining period and withstanding a barrage of shots in the first half of overtime that led to David Krecji plunging a black-and-gold dagger square into the hearts of thousands across Ontario. Watch the replay again and pay attention to the dozens of fans burying their head into their hands. Leafs fans young and old will not fall asleep for the next month before looking under their beds and in their closets for the trio of David Krejci, Milan Lucic and Nathan Horton. The boogeyman has been replaced; the Bruins' top line is the new terror that haunts each and every Leaf die-hard.

The Bruins brought their A-game to Toronto after the poor performance in Game 2. They now have a commanding 3-1 series lead coming home and are one game away from advancing to the Eastern Conference Semifinals. Krejci, arguably the 1st Star of the series has terrorized the Maple Leafs, as he already has 10 points in four games. The offense is clicking, sans the BMS line, the defense has been solid and Tuukka Rask has made his fair share of ridiculous saves. Now the blue and white pins are lined up just right for the Bruins to smash them down tonight.

The B's are in another elimination game. A game where you can send a team packing for the off-season and give them a jump start on improving their golf swing. A chance to punch your ticket to the next round and continue the quest for the most glorious trophy in all of sports.

In the six years Julien has been behind the bench, the Bruins are 6-10 in elimination games. Its a tender topic of discussion for fans, as anytime an elimination game comes around, in some way, the painful memories from the 2010 playoffs are brought with them. That stat line will live in infamy for fans: four games. Four chances to eliminate the opponent and move on to the Eastern Finals. And four times, the Bruins were denied.

The Bruins redeemed themselves the following summer, as they learned their lesson from the previous year and won the Cup, but still crossed some bumps in the road along the way. Losing two Game 6's to Montreal and Tampa Bay set up Game 7's at the Garden. And in both of those games, the Bruins came out on the winning side.

Friday night will serve as a barometer for the Bruins. This year has seen the team go through long stretches of inconsistent and lackluster play, most recently in the Game 2 defeat just last Saturday. After such a strong outing to open the series, it was difficult to watch the team struggle versus a Maple Leafs team that looked like they simply wanted the win more. Yet if the last two performances in Toronto are any indication, this team is not about to let off the gas pedal.

The Bruins can eliminate the Maple Leafs and punch their ticket to the Eastern Conference Semifinals where they would most likely play either the Washington Capitals or the New York Rangers. From millions of Bruins fans across New England, we ask that the team does not sleepwalk through Game 5. Finish the series, win the game, and send the Leafs packing