The Bruins 4-1 win was impressive and it was the first time in a while Bruins fans have seen how the Bruins can really play. But the Bruins where expected to win against a Leafs team that really isn't a very good team. The Leafs biggest problem is goal tending and defense which showed in their first playoff game since before the 2004 lock out. 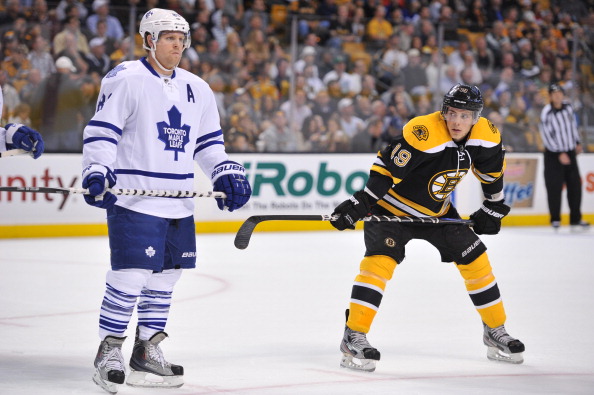 Period 1:
The Bruins scoring started with veteran defense man Wade Redden. The Bruins were down 1-0 early in the game after a Leafs power play goal. That's when Redden scored the first goal of the playoffs for the Bruins. It was a spark for the team and the Bruins played with the most intensity they've played with all season. Later in the period Nathan Horton scored a goal when he re-directed a Wade Redden slap shot.

Period 2:
In the second period David Krejci scored a goal 10 minutes in. The goal came when Krejci was centering Milan Lucic and Jaromir Jagr. Scoring when Krejci and Jagr are on the same line? It's crazy I know, I'm sure Claude was shocked, but don't worry Bruins fans; when the Bruins got a padded lead Claude moved the lines back to "normal"... But Claude didn't revert to the old lines until after Johnny Boychuck really padded the lead scoring Johnny rocket.

Period 3:
In the third period no one on either team scored a goal. The Bruins packed it down and played defense while the Maple Leafs continued to play poorly. For the first time in a while, months maybe, the Bruins held a lead and played a solid full 60 minute game. After the game there was a scuffle on the ice between both teams.


Watch:
One low point of the game for the Bruins was Andy Ference elbowing Grabovski in the head. There was no penalty called on the ice at the time but it was clear he did elbow Grabovski and a fine, or probably a suspension, is likely.