Finally. Its may and spring has just about slapped every New Englander out of the Winter blues. And finally it's time for Bruins playoff hockey.Hopefully the playoffs snap the Bruins out of their own blues. The team can finally get a fresh start and start to string some wins together. Hopefully.

The Bruins first round match up is their division rivals the Toronto Maple Leafs. The Leafs caped off the season with a 26-17-5 record and finished third in the North East behind the Bruins and the Canadiens. A lot of people say the Leafs made it only because it was a lockout induced season. Can you blame them? The Leafs have been worse than average in recent years and the league was relatively shocked when they made the playoffs. The Maple Leafs giant weak spot is their goal tending and defense while their strength is offense. they are in many ways the opposite of the Bruins. 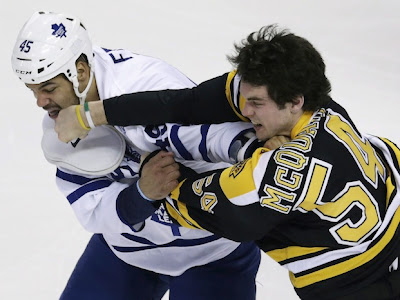 The Bruins have a lot of problems themselves though, starting with the forwards. There are a few players on the Bruins that need to do better in particular.

Milan Lucic- Lucic only scored 7 goals on the season. To go with his lack of scoring was a lack of physical play. Lucic, a 6 million dollar forward, was almost non existent all season. The Bruins need Lucic to play physically and set the tone for the entire team. Scoring isn't that big of a deal as long as Lucic plays a physical game.

Nathan Horton- Horton has been out for the past two weeks with an upper body injury after a fight with Jarome Iginla. Before the injury Horton was inconsistent all season scoring only 13 goals. For the Bruins to make a deep run they'll need Horton to come up big and come up clutch.

Peverley and Kelly: The two go together like bread and butter. Unfortunately, this season, the butter curdled and the toast got burnt. Neither of the two have had a good regular season which has resulted in a struggle of goals. The Bruins win games because of depth and the ability to role three lines. But this season the third line has been the Achilles heel of the Bruins team. The two combined only have nine goals and 18 assists which compared to the two last years is very disappointing.

Sadly, for Bruins fans everywhere, Claude is still being a stubborn fool. Its playoff time, the important games are here, but Claude Julien still refuses to put the best lines together. A Soderberg-Krejci-Jagr line? Dont expect to ever see it Bruins fans. It looks like Soderberg and Dougie Hamilton won't even play. Thanks Claude.