Bruins Vs Rangers: Keys To Game 3

Its time for game 3 of the Eastern Conference Semi Finals in New York City. The Bruins took the first two games at home and now are away for two games against the Rangers. 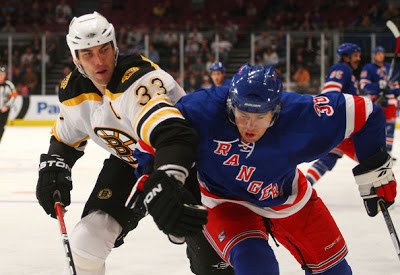 For the Bruins to win in New York they need to consistently play that great Bruins style game, much like in game two against the Rangers. As Chris Kelly said "We want to go out and just play well". If only Kelly could abide by his own quote as his entire line has had a miserable post season. Kelly has 0 goals and 0 assists with a -5 plus/minus. Peverley only has 1 goal, 0 assists, and a -3 plus/minus. Tyler Seguin has been the most disappointing, because we expect things from him, Seguin has 0 goals, 1 assist, and a -2 plus/minus.

If the Krejci line hadn't turned it on in the first round and now Marchand in this round; the Bruins would be in a lot of trouble and probably out of the playoffs. Then things would be very different for the Bruins, Julien probably would have been fired by Neely, Chiarelli would have left because his contract would be up and he loves Claude. We might have seen Don Cherry as Bruins GM and Guy Boucher as head coach. Which doesn't sound awful.