Bruis Vs. Rangers: Keys To Game 4

Tonight the Boston Bruins have a chance to sweep the Rangers in the Eastern Conference Semi Finals. The Bruins have been the better team despite what Lundqvist saying that the Bruins have had "lucky bounces" and that's why the Bruins are up 3-0 in the series. 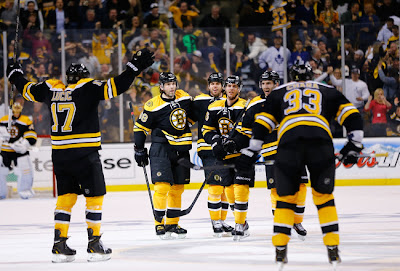 The Bruins have played great most of the series. Whether it's because the Rangers are just that bad or the Bruins are actually that good, doesn't matter, because now the Bruins are at least gaining their confidence back. The team is finally starting to get back to their winning and physical ways.

The Bruins can also thank Tort's for being even more of an offensively inept coach than Claude Julien. The Rangers power play is even worse then the Bruins and it looks like the Rangers players are starting to unsubscribe from Tort's shot blocking philosophy.

The Bruins can make up for the Toronto series and move on to the Eastern Conference Finals by stomping on the head of the Rangers. The Bruins just need to skate their game and keep playing tough against the Rangers who will crumble before their eyes, just like in game 3. It's hard to tell though whether the Bruins fans will be happier to move to the second round or to see the Rangers beaten. As Micheal Felger said "Rangers fans suck". Boston vs New York always has a bitter feel.