It was 4-1 five and a half minutes into the third. 4-1. Time was ticking down, and the Bruins season was coming closer and closer to the end. The Leafs, led by Phil Kessel could smell the victory. They were 15 minutes away from the Eastern Conference Semi-Finals, with a fat three goal lead, a lead that seemed impenetrable.
It was not.
The Bruins sprung out of the gate in a full sprint. They played Bruins hockey, laying hits, playing physically, and putting pressure on the Leafs. This surge led to the first goal, when the youngster Matt Bartkowski slipped a wrist shot passed Reimer, whom the Bruins could barely solve on Sunday night in Game 6. The lead was short lived though, when Cody Franson scored his first of two goals on the powerplay to lock the game up at 1.
After Franson's goal, the Bruins play slowly declined. They lowered their physical tempo, and stopped getting good opportunities. They stopped producing offensively. Toronto on the other hand, backed by a confident James Reimer in net, did not stop producing. As the Bruins took their foot off the gas, the Leafs stepped on it, with Franson scoring his second consecutive goal to take a lead 5:48 into the second. At the end of two, the B's managed to stay in the game, trailing the Leafs 2-1.
That feeling soon slipped away. A little more than two minutes into the third, Phil Kessel found a puck off the post, and an empty net in front of him, and jammed home Toronto's third goal of the game from right next to the net. But they weren't done. Three minutes and twenty seconds later, Nazem Kadri scored his first playoff goal, which appeared to be the seal for Game 7. As more time ticked away, the arena got emptier and emptier. It was a three goal deficit for with 12 minutes left, against a goalie who the Bruins just couldn't solve. It just wasn't there for the B's. 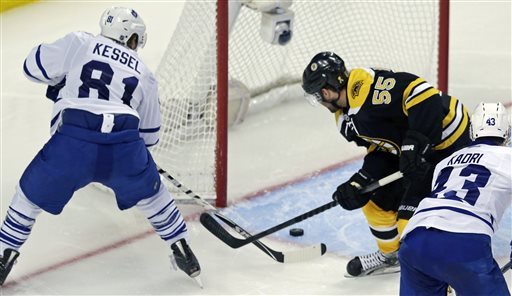 Although it was close, it still wasn't over. The Bruins had a shimmer of hope nine minutes into the third, when Nathan Horton kept with a play, and finally put a puck past Reimer.
The Bruins had life, but it wasn't a comeback... yet.
Time was against the Bruins, and it was moving quite quickly. Ten minutes left, then seven, six, and four. Three minutes left, and the Bruins trailed by two goals, and although the offensive pressure had turned up, not much was looking good for the B's. Less than two minutes to go now, and the Bruins net is empty. The B's put men in frontt, and fired the puck at the net (there's an idea). Well, long story short, it worked. With a buck-twenty two left to go, Milan Lucic picked up a rebound and buried it, making it a one goal game.
Then the thoughts began to creep into everyone's head... "Could this really happen?"
The net was still empty, and the crowd had life again. But that couldn't stop the seconds from ticking off the clock. And did they ever. A minute left to go, with the crowd on the edge of their seats, waiting for that one last spark to set off the fireworks. Patrice Bergeron gets the puck, and with 51 seconds to go, he fires the puck on net, and it goes by the screening Zdeno Chara, and by Reimer.
The crowd erupts. Tie game.
After a slight delay that may or may not have been due to a revamped TD Garden crowd throwing playoff towels on the ice, play started once again. Nobody's heart was beating correctly for those last 51 seconds, and the Bruins almost put in a game winner off the stick of Rich Peverley, when a puck in front of the net just slipped off his stick.
The clock ticked again, as if it was against everyone now, three, two, one, and then the horn.
Overtime.
Game 7 Overtime.
As everyone waited for OT to begin, they couldn't helps the thoughts from creeping in again. "Comeback" was there to stay, despite the fact that it could be put away in the past with just one Maple Leaf goal. Plus, people were preparing for the feeling to come, which Bruins fans are no stranger to, having felt the good side of it, and the bad side of it throughout the past couple years. Anxiety was is abundance.
It was time... puck drop.
The comeback was almost put to an end just two minutes in, when Rask's heroics came in once again, with an outstanding pad save on a shot that nearly slipped in. Back and forth they go, end to end at some points, and setting up at others. Five minutes into overtime, and still no end.
A little over 14 minutes left in overtime, and Patrice Bergeron, one of the heros of regulation, carries the puck into the zone, fakes a shot, and dekes around a leaf, heading towards the right side of the net. He continues, curling around the net from the right side to the left corner. He picks up his head and observes his options.
The crowd is on it's feet at TD Garden.
He curls just below the far hashmarks on Reimer's right, and gives the puck off to Seguin. Bergeron moves into the high slot. Seguin spins and sends a quick shot in on goal, which is turned away to the far boards by Reimer. Boychuk pinches in to retrieve the puck, and Bergeron fills his place. Boycuk rips a wrist shot toward the net, which never gets there, as it's blocked away to the corner.
Marchand picks it up, and moves up the boards. Bergeron steps back into the high slot. Marchand sees Bergeron alone at the top of the circle, with an open lane for a one timer. He sends it to Bergeron, who unloads a slap shot on Reimer, who is sharp enough to make the save. Seguin can't bury the rebound in front, as he's pushed away by the Toronto skater.
Bergeron follows his shot. The puck slips toward the net, and is sent out of the crease away from Reimer, who is on the ground. Bergeron moves in toward the net, the puck coming toward him. The puck reaches him, and Bergeron, who is just below and inside the faceoff dot to Reimers left, wastes no time, and snaps a shot toward the net midstride.
Reimer is down. The puck is sent in toward the net off of Bergeron's stick. All eyes are on the piece of black rubber. It heads toward the net, and then it becomes clear. Nothing is in front of it.
TD Garden, Patrice Bergeron, Tyler Seguin, and Brad Marchand, and the remainder of the Bruins simultaneously erupt. The referee is flailing his arm toward the net. The goal horn sounds... the puck is in. The Bruins win. The Bruins win.
Bergeron has that "kid in a candy shop" look on his face as he darts toward the boards, jumping up and down with excitement. The bench empties, and begins charging towards Bergy. Rask somehow gets there at the same time as everyone else. A picture perfect shift for Bergeron, the alternate captain.Two clutch goals for him, and the Bruins win. They're piling on along the boards... the comback is completed... the Bruins win.

Please, if you have time, check out the Game Winning Goal here. Check out not only the goal, but the picture perfect shift from Bergeron. ----->