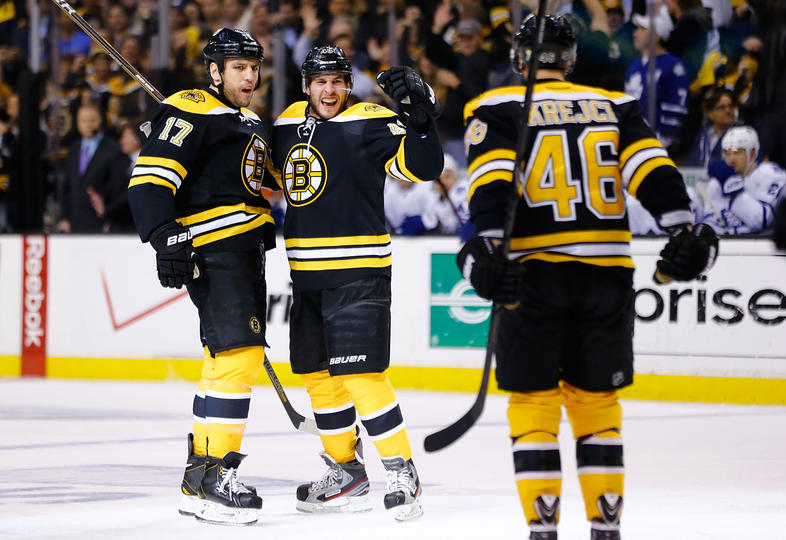 Put Them On Ice:

All of the headlines wiped away in a matter of minutes. The course of the NHL playoffs jolted. The job applications for dozens of players, coaches, and even possibly a GM, were suddenly ripped in half.

The mood with roughly 10 minutes to go in the TD Garden and across New England was a jumbled mess of anger, sadness, frustration  and ridicule. The Bruins again were putting forth a sub-par effort in Game 7 at home. The Bruins were coasting through the final frame, and dozens of yellow and black seats could be seen in the stands. The night was over. The season was over. Turn out the lights at the Garden. The Bruins fell flat on their face and choked away another series.

They were dead and buried. The series was over and the Maple Leafs were on their way to hosting the New York Rangers in the Eastern Conference Semifinals. Sign the papers, the morgue was receiving a 400 pound bear tonight slabbed on top of an over-sized gurney.

And then the proverbial 'switch' that has so defined the inconsistency of this team all year was flipped.

The Bruins started playing like they knew their season was over if they could not muster two more goals in the last 10 minutes. A seemingly impossible task considering how little offensive presence the Bruins have had over the past three games. And also considering how James 'the Sherimnator' Reimer had turned into Patrick Roy.

But in the course of 20 real time minutes, the Bruins rose from the dead. And the Maple Leafs imploded.

All of the headlines that were set and ready for print were called back faster than LeBron's entourage destroying a tape of him getting dunked on. Faster than the weather changing in New England hour-to-hour. Faster than anyone's mind could really comprehend.

The Bruins were dead on the ice. Deader than dead. Series over, season over, another epic choke on home ice. But the Bruins reared back and smacked the Grim Reaper with a two-hander right across the face.

I watched Johnny Damon launch a grand slam in the 2nd inning at Yankee Stadium to put the Sox up 6-0 in Game 7 of the ALCS.

I watched Manchester City last May score two goals in stoppage time on the last day of the year to snatch the English Premier League title away from rivals Manchester United with literally 10 seconds left in the game and their season.

And now I can chisel this moment away into my memory bank of the greatest sports moments I have ever witnessed. And the irony of it all: the Bruins scored four straight unanswered goals to win the series. In Game 7. At home. A much better result than three years prior.

As for the Maple Leafs....dear lord, what a heart-breaker. Webster's Dictionary will need to invent a new word that describes the level of pain Leafs fans the world over feel tonight. A devastating, unimaginable nightmare that even Freddy Kreuger himself would deem too harsh. 10,000 volts through the stomachs, hearts and minds of millions of fans. Let the healing begin.

And for Bruins, they survive to see another day. The 2nd round starts Thursday. May the spirit of both Dr. Jekyll and Mr. Hyde live on.