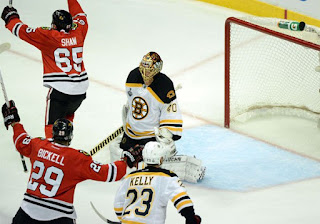 What a punch below the belt.

And that is the beauty, and the danger, of overtime playoff hockey. It either ends in pure jubilation and an enormous release of bottled up emotion, or it ends with a stunned shock that leaves you staring at the TV stone-faced for minutes on end. I'm assuming most Bruins fans who stayed up all night felt a lot more like the later last night.

The Bruins dropped the opening tilt of the Stanley Cup Final versus the Blackhawks after almost 120:00 of hockey was played in a game that stretched over into Thursday morning. The 3OT goal scored by Andrew Shaw gave the 'Hawks the early 1-0 lead in the series.

The Bruins had dozens of chances to end this game in each of the 3 OT periods. And how many of those chances belonged to supposed bona fide goal-scorer Tyler Seguin, may you ask? Meh, Ill be generous and say roughly six or seven. Six or seven quality, excellent, and superb chances to win Game 1 and save a whole lotta' face for the Bruins who blew two 2 goal leads during the course of play. But Seguin, along with the rest of the B's, could not deliver the dagger.

Seguin was skating with the 1st line with David Krejci and Milan Lucic after a third period injury to Nathan Horton knocked him out of the game. And from the rest of the third period on, the Bruins could not slip one more goal past 'Hawks goalie Corey Crawford to grab the victory 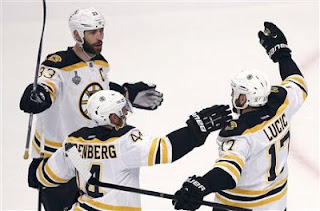 *The trio of Krejci, Lucic and Horton continued their dominating play this postseason, picking up right where they've left off since the playoffs started. The 'Hawks had no answer for the Bruins' top line, as Lucic scored two goals, both assisted by Krejci. Krejci was the best player on the ice for both teams in Game 1. Every time he had the puck he did something with it. Time seems to slow down when Krejci has the puck on his stick. Game 1 was no different.


*Another positive sign to go along with the play of the first line was how the defensive unit shut down the Blackhawks' top weapons. Throughout the game, you did not hear Doc Emrick call the names of Jonathan Toews, Patrick Kane, Marian Hossa or Patrick Sharp all that often. Save for a few individual efforts from each, on the whole, the six D-men did a terrifc job of shutting down the forwards of the 'Hawks. The first 'Hawks goal came from Brandon Saad off a quick shot in the slot, the 2nd on an oddman rush off a bad turnover from rookie Torey Krug, and the third deflected off of Andrew Ference's skate and past Tuukka Rask.

*Tyler Seguin, as mentioned previously, had multiple chances to either score a goal in regulation or put away a game-winner in each of the three OT periods. But again it was more of the same from #19: he either rifled his shots right into the crest of Crawford or he could not settle the puck enough to let a decent shot go. If this seems status-quo to you when it comes to Seguin scoring  in the playoffs, you're not alone. Andy Gresh of 98.5 The Sports Hub tweeted out this little tidbit about Seguin's goal-scoring in his playoff career:

Yikes. That is scary. Seguin has had a rough year, and his poor play has followed him all the way through the Stanley Cup Final. He's regressed from last years form. He can't play the body. He loses puck battles. He routinley gets pushed off his rushes into the zone and the play goes the other way as a turnover. He needs to develop a shred of nasty in his game and he needs to find it sooner rather than later.

*Boy, do the Bruins miss Greg Campbell. His injury has forced Claude Julien to shuffle the bottom two lines, and the first game vs the 'Hawks was not pretty. The bottom six forwards did not have a good game whatsoever. Save for a handful of scoring chances, with one coming early on in the 1st OT period on a rush from Dan Paille and Shawn Thornton, both lines looked out of place and choppy the entire game. Chris Kelly and Rich Peverly had especially rough games, combing for a -5 and 0 points. 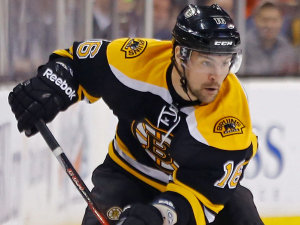 *I've just about reached the end with Kaspars Daugavins. He's played nine games for the Bruins (six in the regular season, three games this postseason) and has only recorded one assist. He had a glorious chance in the third OT period off a feed from Seguin that could've ended the game. He recieved the pass and should have just smacked the puck home. Instead, he tired to dangle around Crawford and the play was broken up. He may have fancy moves in shootouts, but there is a reason why the Ottawa Senators dropped him to the waiver wire. His game is subpar, and the only reason he is in the lineup is due to Campbell's injury.


*Even though the B's AGAIN blew a 2-goal third period lead, and even though the Blackhawks had multiple stretches of play where they were outskating and outhitting the Bruins, as hard as it is to say, I cant get TOO upset over the result. Yes, it sucks they lost. And it sucks how the game went on for enternity only to end as a loss. And yes its maddening that the Bruins could not hold onto their lead not once but twice, but in the grander scheme of things, you have to remember that the Blackhawks are a very good team.

The Bruins were not going to sweep them like they did the Pittsburgh Penguins. The run of play the Bruins have been on dating back to the last 10 minutes of the opening round versus the Maple Leafs has been historical. This series will be a grind. It will not be a cakewalk like the previous two versus the Rangers and the Penguins. The players (and the fans) have not seen a series defecit this entire posteason up until this point. Maybe it will be a good thing for this team to come into Saturday night with the extra pressure to tie the series and avoid going down 0-2.

Game 2 is Saturday night after a much-needed extra day off Friday. The Bruins will be alright. They have proven that when their backs are agaisnt the wall, they play their best hockey.