Bruins vs Blackhawks: Keys To Game 1 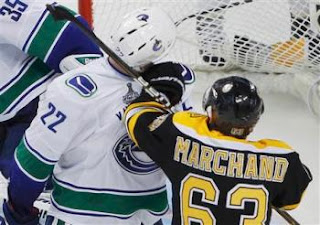 It was another tough path for the Bruins getting to this Stanley Cup. Just like 2011 there was talk of coaches being fired and players being shipped out of the city. But the Bruins fought back once again and now fans are reliving a 2011 dream.

The Bruins though, as stated before, have a daunting task in front of them. Chicago is perhaps the best team in the league bolstering not only an outstanding offense but also a strong defense and some solid goal tending. The Blackhawks top lines are stacked with Teows, Kane, Sharp, Hossa, Frolik and Bolland. Chicago also has great grinders like Shaw and  Bickell. Bryan Bickell has been compared to Milan Lucic only more aggressive but a worse skater.

Chicago's defense is also feared for scoring and checking with players Brent Seabrook, Duncan Keith, Johnathon Oduya and Niklas Hjalmarsson. My prediction is Hjalmarsson will be a player Bruins fans will learn the name of. Hjalmarsson is a guy you would expect in a Bruins uniform and he reflects a younger Dennis Siedenberg.

So how can the Bruins beat such a high talent team? They have to repeat what they did in the last Stanley Cup against the Canucks and they have to do what they did against the Penguins. The Bruins will have to grind the Blackhawks down and get under their skin while shutting down their stars. The Bruins gave the Penguins no room to skate or shoot with their stick play and defensive position being outstanding. Against the Canucks the Bruins got under the skin of the Canucks players and so the team collapsed mentally. If the Bruins do both they would have a better chance to beat the Blackhawks.