The 2013 Stanley Cup Finals starts Wednesday in Chicago as the Chicago Blackhawks host the Boston Bruins in the best-of-seven series. Both teams will be looking to establish their own 'dynasty,' or as close to a dynasty as you can become in today's NHL. The league has not seen a repeat champion since the 1998 Detroit Red Wings. And with the Los Angeles Kings obviously being eliminated by the Hawks last Saturday, 'tis another year that a team will not repeat.

The Boston Bruins can win their second Cup in three years, while the Hawks are trying to go two-in-four. Amazing considering how many different champions have been crowned over the last 15 years. Another Cup for these Bruins players would solidify their spot in team history. The likes of Patrice Bergeron and Zdeno Chara would be mentioned in the same breath as Bobby Orr and Derek Sanderson: players who have carried the franchise to multiple championships wearing a spoked B on their sweater. 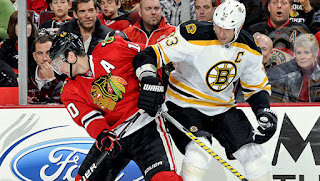 The B's come into the Finals fresh off a sweep of the Pittsburgh Penguins, a team in which the NHL's best defensivemen Zdeno Chara (and NOT a Norris Trophy candidate this year) along with the rest of the defensive core completely manhandled.


We all know Chara and fellow stud D-man Dennis Seidenberg have the ability to totally shutdown whatever line they play against. The Hawks' roster is not like the Penguins, or Rangers even, however. They are not a 'top-heavy' team. They have received tons of secondary scoring from their other lines, as their first line of Jonathan Toews, Bryan Bickell and Patrick Kane have amassed only 36 total points thus far, with Toews scoring only one goal. By comparison, the Bruins' top line of David Krejci, Milan Lucic and Nathan Horton have totaled 51 points.

Why the Bruins Will Win

Captain Zdeno Chara has been one of the most consistent and dominate defensivemen the game has seen over the past seven years since signing with the Bruins. The whole demeanor of the franchise was turned around when Chara was signed here in 2006. It was the re-birth of 'Big Bad Bruins.' His attitude and intensity is palpable to his teammates, and the team goes as Chara goes. The Eastern Conference Final was flipped on its head when Sidney Crosby decided to take a poke at Chara's legs, prompting one of the most enjoyable scenes thus far seen in the 2013 playoffs: a crazed and seriously PO'd Chara bending to Crosby's eye-level and roaring right in his face.

And as the B's went on to sweep the Pens, it was clear that from even as early as 40 minutes into Game 1, Chara and the Bruins had set a physical tone that the Pens could not match. It will be up to Chara to set the tone early in Game 1 and send the message to the Hawks that they have the same thing coming.

Another playoff run and another all-time performance from David Krejci. Krejci has 21 points in 16 games this postseason. He leads the league, and if things go right for the B's this series, he can finish with the most points in the playoffs for the second time in his career. Something clicks inside Krejci when the playoffs start that turns him into a points machine. But when we talk about Krejci's point production, we cannot leave out who skates on his line. Both Lucic and Horton have shown up big-time since the playoffs started.

I believe 100% Lucic and Horton had such sub-par years directly because of the lockout-shortened season and the style of how they play. Both of them skate hard, hit hard and play hard. The NHL played a 48 game season, with tons of back-to-backs, three games in four nights, five in seven, etc. I do believe that Looch and Horty were "taking it easy" during the semi-meaningless games in January and February to save their energy and bodies for the playoffs. I know they are paid to play professional hockey, but its not logical to play the way the Bruins play at their peak every single night during a season that only lasts three months. And to back it up, just use the eyeball test. The top line has been a three-headed juggernaut since the playoffs started. If the line keeps performing like they have, the Hawks defensive-duo of Brent Seabrook and Duncan Keith will have serious problems trying to slow them down. 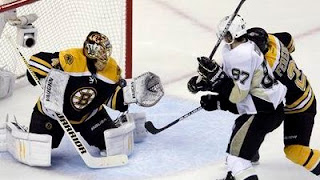 Shh, don't say it out loud, but Tuukka Rask is having a better postseason than Tim Thomas did in 2011. It seems sacrilege to even suggest that another goalie could come close to what Thomas did, but it's true. Rask through three rounds has posted a 1.75 GAA, a 943% and has two shutouts. Although he still has one more series to go, he has proven that he can be the #1 goalie for the Boston Bruins going forward. Peter Chiarelli has again stated his desire to pay Tuukka "handsomely" once the season ends. And he has earned it. After a shaky first round versus the Maple Leafs, Rask has played out-of-this-world since. And if it wasn't for the ice-monster (distant cousin to the turf-monster) making an appearance in Game 4 vs the Rangers, Rask and the Bruins could have had an eight game winning streak going into Wednesday.

Rask twice shutout the greatest collection of offensive talent the NHL has seen in almost 20 years. He frustrated the Penguins for four straight games, all while getting some luck from the posts in Game 1 and in double OT in Game 3. But I mentioned this before: when a team is ringing the pipe constantly, a large part of that can be because of the goalie, not just bad luck. The Pens started squeezing their sticks knowing Rask was not going to let any normal shot through. They tensed up and tried to pick too many corners. Those shots either rang the pipe or sailed wide. If Rask can impose that dominating presence early, the Hawks' skill players can meet the problem.

This team is on such a roll that it seems hard to imagine the Hawks stopping them. Rask is playing on a different planet right now. And its not all because of him. The defense in front of him has played just as good if not better. They've played smart, fast and tough versus the East's most stout competition. Uber-rookie Torey Krug is the only defensemen of the six who did not play in 2011 versus Vancouver.

The top line of Krejci, Lucic and Horton has not been stopped all postseason. I see no reason why that will change versus the Hawks. An important factor to pay attention to is the third and fourth lines. With Greg Campbell's injury, Claude Julien was forced to shuffle the bottom two lines. The Bruins' Merlot line has singlehandedly changed the momentum of previous postseason games, Game 7 vs Vancouver the greatest example. Julien will need to find the right combination of players to maximize the four-line 'wave' mentality the Bruins play with.

The X-factors in this series will be Tyler Seguin and Jarmoir Jagr. I'm still holding onto the belief that both Seguin and Jagr can break their scoring drought pot a few goals. Anything at this point will be gravy for the both of them. And what better time to do it then in the Finals. Although Jagr has not scored, he can still give teams headaches. His puck possession can drive fans from both teams nuts. But his slick hands have accounted for 7 assists. And I'm sure Jagr would love to pull a Mark Recchi and (maybe) retire off into the sunset with one last Stanley Cup title to his name.

This Stanley Cup Final will be all-timer. The games will be fast, furious and beyond intense. The stomach-churning end-to-end rushes will be plentiful and nerve-wracking.

But it's important to not lose sight of what the Bruins are involved in. Many teams never get the chance to play for a Cup, and the Bruins are trying to win their second in three years. This does not happen routinely. Enjoy the ride and soak up all of the stats, interviews, recaps, and game action you can. The 2011 Title was equivalent to the 2001 Super Bowl for the Patriots: nothing can beat that feeling of being the underdog, shocking the world, and winning a Title for a long-suffering franchise.

Now, its time to make like the '03 and '04 Patriots. Establish a dynasty. Become the best team in the NHL, not just for one year, but for multiple years. Exert your strength and skill and shutdown another high-powered offense. Become legends in Bruins history. Become legends in Boston. It all starts at 8:00 PM June 12.

Continue to check back at Bruins Life for postgame recaps and locker room interveiws throughout the 2013 Finals.