Bruins vs Blackhawks: Keys To Game 4 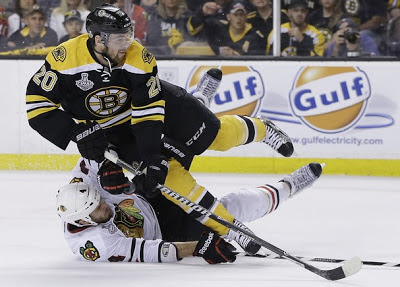 The Bruins domination of the Blackhawks doesn't show up in the goal column, clearly, but instead the Bruins have dominated the 'hawks defensively. The Bruins have been able to shut down Teows, Kane, Hossa, and Sharp every game so far this series. Chara and Siedenberg have been just as good against Chicago as they were two years ago against the Vancouver Canucks and the Bruins forwards such as Bergeron, Marchand, Kelly, and Lucic have continued to play physically and play great in their defensive zone.

Of course one of the hugest factors of the Bruins success in the playoffs has been Tuukka Rask. Rask has been a stud so far in these playoffs and has numbers comparable to that of Tim Thomas magical Cup run in 2011. Rask has a great 1.64 goals against average this post season and a .946 save percentage to go with it. Tuukka's numbers have also been inflated because of the bad first round the Bruins had against the Maple Leafs.

1) Step On Their Throat. A 3-1 series lead is a big difference compared to a series tied at 2-2. So the Bruins need to pounce on the chance and defeat the Blackhawks tonight. The Bruins will have to continue to dominate the Blackhawks defensively.

2) Tuukka Time. If Tuukka keeps playing on this level then it'll make the Bruins defensemen's jobs easier and allow for them to chip in offensively. The Bruins don't often score a lot of goals, so Tuukka will have to keep the puck out of the net for the Bruins to win.