Was Campbell's Broken Leg a Blessing in Disguise? 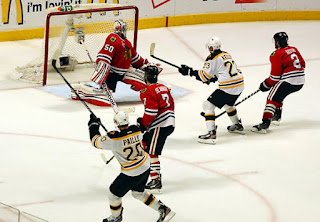 After Gregory Campbell went down with his broken leg, there was speculation on who would fill in his place. As we saw in game one vs the Blackhawks, inserting Daugavins into the third line and moving Peverley down to the 4th did not do well.

Claude finally decided to switch up his lines creating the dominate new third line of Seguin Kelly and Paille. This line has been responsible for carrying the Bruins to back to back victories and a 2-1 series lead.

Seguin is playing much better, assisting in three straight games, while Paille and Kelly have found the back of the net. The Bruins now have 3 very solid lines that can cause headaches for Chicago.

The only question I have is, what would be happening if Campbell wasn't out? Claude would have rolled the same 4 lines, keeping the old dud 3rd line out there. Maybe the Campbell broken leg was a blessing in disguise, I hate to say a player getting injured is good, but if you look at the Bruins over the past three games, everyone besides Daug-man, and Peverley is causing a threat, Shawn Thornton is not much of a threat either way.

Now we have Kelly, Seguin and Paille stepping up in a big way, and the Bruins are 2 wins away from raising Lord Stanley. It will be interesting to see what Claude and Peter decide to do in the off season, but for now let's thank Claude for having the balls to switch his lines, because he is making everyone think he's a genius, well he's making me think he's a genius.