One More Time: Bruins Heading Back to the Stanley Cup Final 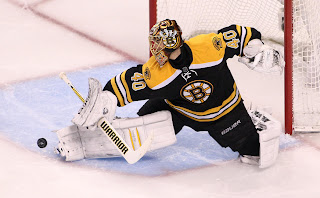 Pinch yourself, what you just witnessed over the course of seven days really happened.

The Boston Bruins closed out the Pittsburgh Penguins at TD Garden with a 1-0 score courtesy of an Adam McQuaid rocket-blast 5:01 into the third period.

The Bruins are on their way to their second Stanley Cup appearance in three years where they will take on either the Chicago Blackhawks or the Los Angeles Kings.

The Pittsburgh Penguins, also known as 'The Greatest Offensive Juggarnaut the NHL has Seen in 3 Decades," were shutdown and smacked around by the Boston Bruins in four straight games. No one saw this kind of result coming. And if you did, show me the ticket with the payout numbers.

Four games. Four dominating, hard-hitting and smuthering games put forth by the Boston Bruins in the Eastern Conference Finals. Versus the 'greatest show on ice.'

The Pittsburgh Penguins marched to the beat of the Bruins' drum in this series. They were dominated in a way no team had ever come close to doing this year. The Penguins never held a lead the entire series. Playing from behind or tied for 240 minutes. Is that even possible? Not a single second playing with the lead. Not. One. Singular. Second.

Crosby, Malkin, Neal, Kunitz, Iginla, Letang, Morrow. All 0's across the board. No goals, no assists. 162 goals scored in 48 games during the regular season. 47 in the playoffs. Two in four games versus Boston.

The Pens were 0-15 on the powerplay. The NHL's most potent team on the man advantage were denied everytime.

The stats are just as impressive as they are unbelievable. Trying to nail down what exactly the Bruins did to totally dismantle the Penguins can take hours. Where to begin?

Tuukka Rask threw two shutouts, allowed only two goals ALL SERIES and now stands with a .943 save percentage this postseason. Ridiculous numbers considering the caliber of players that were just gunning towards him doned in Penguins sweaters.

The defensive core, led by captain Zdeno Chara and Dennis Seidenberg shutdown the biggest offensive weapons left in the NHL playoffs this year.  And although Torey Krug did not score any goals, he again showed his maturity and poise as an NHL defenseman. He stood toe-to-toe with the Penguins and stood his ground.

Brad Marchand, Patrice Bergeron and the top line of David Krejci, Milan Lucic and Nathan Horton again showed up big for the second series in a row.

And to think...the Bruins were 10 minutes from losing 4-1 in Game 7 versus Toronto three weeks ago. Then they recieved a new lease on life from the Hockey Gods. They seized the opportunity at the neck with their razor-sharp jaws and have refused to let go since.

Eight wins in nine games. A better run than what the infamous 2011 Championship team put forth. Two years ago, we all witnessed one of the greatest hockey games ever played, Game 7 at the Garden versus Tampa Bay. That game and Game 4 versus the Penguins both ended 1-0 with goals scored in the final frame of play. But boy, how different the feelings are.

In the late hours of March 27, rumors were flying on Twitter that a trade was in place to bring Jarome Iginla to Boston. It was done; the framwork agreed upon, all that was needed was the players consent to waive his no-trade clause. But at the 11th hour, something went screwy. The Calgary Flames pulled the plug on the deal. The Penguins lept out from the shadows and stole the player right out of the Bruins' grasp.

Iginla felt he had a better chance to win his first Stanley Cup in the Steel City than with the team playing on Causeway Street. He axed the trade and sent himself East Coast bound to the Pens.

It was the slightest deflection off of Iginla's outstretched stick that took McQuaid's slapshot past Tomas Vokun's glove hand. And on the last shot of regulation, it was Iginla alone in the slot in the dying seconds. He let a wrister go, and Rask snapped it out of the air, game over, season over. I can safely say Iginla will have a very, very, very long offseason.


Now the Bruins are back in the Stanley Cup Finals. They will again be playing for hockey's ultimate prize. The greatest trophy in sports. The Holy Grail.

This playoff run has been full of memorable moments: The three goal comeback in Game 7 versus the Leafs. The emergence of the young defensemen versus the Rangers The heroric shift from Greg Campbell. All have symbolized what this Bruins team is all about. Determination, effort, skill, grit and heart.

Lets all enjoy the ride. One more time.