Who Would've Thunk It? 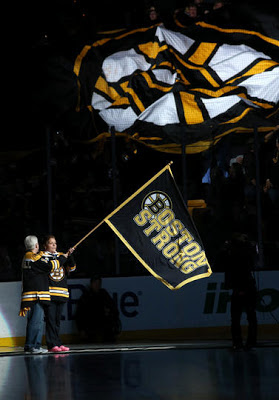 Three weeks ago the Bruins were clinging on life support. After blowing a 3-1 series lead in the first round vs Toronto the Bruins looked like their season was coming to a close. 10 minutes to go down 4-1, every Bruins fan was talking about blowing the team up. But, we all know what happened next the Bruins got that extra kick of life, scoring 3 straight un-answered goal and the eventual overtime game winner to move on to face the New York Rangers, a team much similar to the Bruins.

Many thought the Bruins would ultimately win this next series, but at what cost? Many thought it was going to be a gritty one, but a week later the Bruins found themselves on the verge of sweeping. Then Tuukka slipped on the banana peal and the Bruins faltered in game 4, sending the series to a game 5. Fans and media alike were skeptical that the Bruins perhaps would repeat the torturous 2010 playoffs, blowing a 3-0 series lead, but no, the Bruins finished off the Rangers moving on the face the Penguins.

Dan Shaughnessy wrote an article after game 3 of the Eastern Conference Semis, stating that he thought the Bruins wouldn't lose another game all playoffs. I thought he was crazy thinking we had a chance against the offensive juggernaut of Pittsburgh, containing "the best player in the world" Sidney or should I say Cindy Crosby, the big cry baby.

Anyways, the Bruins showed the NHL that they aren't screwing around, outscoring the Penguins 12-2 in 4 games, finally completing a sweep and now going back to the Cup Finals to re claim Lord Stanley.

The Bruins now wait their opponent, as it is either the Black Hawks of Chicago or the Kings of Los Angeles. Depending on tonight's outcome the series will kick off Wednesday pending a Chicago win or Saturday, pending a LA win.

It will be an exciting series, and the Bruins will once again need to sack up and play with that determination that they have showed the last 10 games.