A Look at Iggy 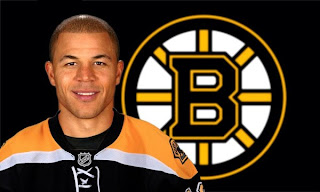 Last season, Beantown, and all of Bruins Nation was shocked when Jarome Iginla, former Captain of the Calgary Flames, made a last minute decision to go to Pittsburgh, and fight for the cup alongside the Pens. Pittsburgh looked very good up until the Eastern Conference Finals, when the Bruins came into view, and well, I think we all know what happened next.
But last season is behind them, and hockey season is creeping up very quickly (maybe because we're not locked out this year!). We learned earlier this offseason that Iginla decided to come to Boston this time around, and it shouldn't take too long for Boston to fall in love with the classy, talented forward.
Iginla, who just arrived with his family in Boston, is very excited to hit the ice sporting a spoked B. Jarome expressed his excitement not only to hit ice, but to be alongside the guys he'll be with out there, particularly guys like Captain Zdeno Chara, and elite defenseman Dennis Seidenberg.


"You can tell all the guys are in great shape, and it starts with Zee. They don’t come in much better shape than him and [Dennis Seidenberg]." Iginla said. “Guys are relaxed, but you can tell they have that swagger and confidence that they’re a good club. It’s fun to join in on that. I’m definitely not joining in feeling they need too much leadership here. I don’t plan on just being a fly on the wall, either, but the biggest thing is playing hard and competing, and I just want to be a part of that. I just want it to be natural.”

Jarome will be lining up along Krejci and Lucic, which looks a line that could provide some very good offense for the B's. Plus, Iggy could be the help the Bruins have been looking for on the power play, both by putting the puck in the net, and as far as leadership goes.

Feel Free to Comment Below to Join the Conversation!