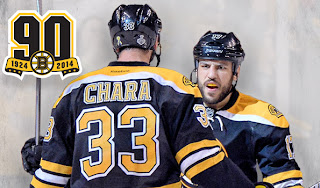 Hockey is three days away, (well maybe, depending on when you're reading this). Either way, the off season is coming to a close, and the boys are back in Beantown for training camp, and will be heading out soon to Montreal, to take on the Canadiens in their first preseason game on Monday, the Sixteenth (NHL Network US).

Montreal, who, if you'll remember, finished second in the East last year rather unexpectedly, is expected to be a similar team this season. The Habs have a lot of  young talent, who can help to carry and energize the team. Montreal can also put the puck in the net, led by guys like Max Pacioretty, Tomas Plekanec, and the newly acquired Daniel Briere. Last season, the Canadiens chimed in at fourth in the league in goals scored per game, at 3.04. Montreal is backed by a solid starting goaltender - Carey Price, who, despite his struggles last season, certainly has the potential to bounce back, and put up some good numbers for the Habs this season. Montreal also has a good defensive core, led by offensive-defensman P.K. Subban. So, we should be up for a good jostling for the upper spots in the new division this season.

So, back to the preseason, the B's, after taking on Montreal on Monday, will head to face Washington on Tuesday. The Capitols also had a good regular season last year, finishing with a division-leading fifty-seven points. Washington, as usual, is expected to put the biscuit in the basket quite a few times this season, led by key guys like Alexander Ovechkin, and Niklas Backstrom.

After and off-day on Wednesday, the Bruins return home to Boston, where they'll play their first home game of the preseason, taking on their new division-rival, the Detroit Red Wings. Detroit, who barely snuck into the playoffs in April, looks to be a better team this year, assuming they don't get struck with injuries like last season. Boston will then head to Detroit, to play a second game against them on Saturday.

The Bruins then return home for another game against the Capitols, this time at home (NHL Network US). On Thursday the twenty-sixth, the Bruins will be in Winnipeg to take on the Jets, who barely missed the cut for the post-season earlier this year. (NHL Network US) The boys in black and gold then folllow up with one more home game, once again against Winnipeg to polish off the preseason.

Then, six days later, the regular season begins, with the Bruins kicking off the season at home, taking on the Tampa Bay Lightning. So get ready for hockey season folks, cause it's almost here!

*Note: All Preseason games begin at 7, except for the final two against Winnipeg, which start at 7:30, and then 9:00, respectively.

Be sure to comment below to join in on the Conversation!