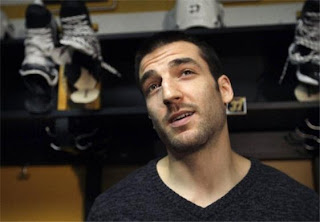 Patrice Bergeron is the heart of the Bruins team, and everything, (and I mean everything, hockey, work, breakfast, whatever) is better when Bergeron is healthy. The problem over the summer was, Bergeron wasn't healthy - breakfast didn't taste quite as sweet. But now, as summer comes to a close, the news is getting better and better.
The twenty-eight year old center, who suffered from a variety of painful injuries earlier this Spring, is getting closer and closer to one hundred percent. Patrice has been on the ice to practice, but he hasn't quite been cleared to play yet. This means that he most likely won't be taking part in many, if any of the Bruins preseason matchups that begin on Monday. Sure, if this were the playoffs, it might, no, this would be another story, but it's not, it's the preseason, so it's a good idea to be cautious when it comes to health, especially for a guy like Bergy. 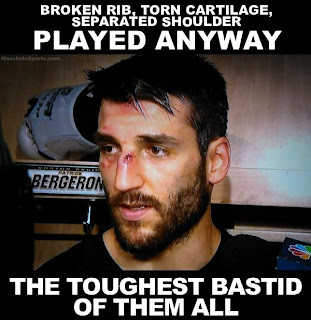 But, from the looks of it now, Bergy could be back in time for the regular season to kick off. He appears to be confident in with his health, and so does the Medical Staff.

"It wasn't bad - I felt it [discomfort] a couple times in one or two battles, but it doesn't seem to linger after it; it stays for 30 seconds or so and then it goes away so I think it's good news," Bergy said.  'I'm just going to have to go through it for a couple of weeks, and then it should be fine. Medical staff is not worried about it, so I'm not worried about it."

So that's good news, Bergeron seems to be in pretty good shape, or about as good of shape as you can be in while recovering from a broken rib, a separated shoulder, torn cartilage and a punctured lung. Having Bergy back soon will also have another added boost, as it will help the new players, particularly anyone playing on a line with Patrice, to adapt to the playing style, and get used to each other on the ice.
Bergeron, like the rest of the B's, is very excited to lace up alongside the Bruins' new additions, like Jarome Iginla, and Loui Eriksson.

"There will be an adjustment to get to know these guys but most of the guys are back (from last year)," Bergeron said. "I think it's good to get some fresh blood and guys who are excited to be here and have the great mix that we have already. I think it's good."


Bergeron has also had a chance to familiarize himself with both Iginla, and Eriksson, before they even came to Boston. Bergeron commented on Eriksson:


"I had a chance to meet him (Eriksson) last year during the lockout at the Spengler Cup (tournament) in Switzerland and he seemed like a really nice guy and now I've had the chance to meet him even more (here) and I'm excited to have him with us," Patrice said. "I think he’s a great player and seems to be a great person."


Bergeron also had a chance to talk about Iginla,


"I had the chance to play with him in the (2010) Olympics (for Canada). He's a terrific person, player and a great leader."

From the looks of it, the chemistry in the locker room already looks pretty good (not much of a surprise there, but it's worth noting, seeing as not all teams click like these guys do). And, we'll say it again, hockey is almost here. Pretty soon, the Bruins will be back on the ice, led by the classiest guy you'll ever meet, Patrice Bergeron.

Be Sure To Comment Below To Join The Conversation!