The Return of Soupy 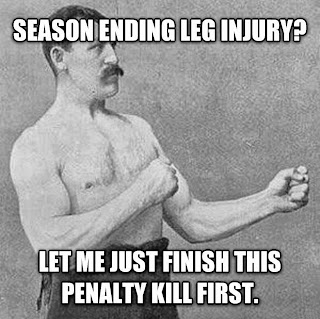 Earlier this Spring, Bruins Nation saw one of the most heroic, inspiring, and dedicated acts you could ever see on a sheet of ice. Gregory Campbell, a player who has always been loved by the Bruins Faithful, instantly became one of the most respected guys in the league, and a legend for Bruins fans to remember forever. As we all know, in doing so, Campbell suffered an extremely painful injury, breaking his leg to block a shot. Soupy's surgery put in screws and a plate inside of his leg, and the Garden warrior hobbled around fore quite a while, cheering his crew on from the outside, but longing to play on the inside.

Last Thursday, Gregory Campbell made his much anticipated return to the ice at TD Garden, and, not to anyone's surprise, was applauded by the loving fans in Boston.

"Of course, I'm extremely appreciative of the support from the fans,"  Soupy said after the match up. "I want to play hard for them and for the city and the organization and their a passionate group, they know their hockey, so it was very nice to hear that."

As for his health, Campbell seems to be improving. After the 8-2 loss against Detroit, Campbell commented on the game, and his condition:

"Well, you like to be on the winning side of things, of course," Gregory said. "But, you know, as far as my body goes, I felt pretty good. I was far from perfect but I think there's a foundation there to build on and I didn't necessarily feel out of place."

"It's been a long couple of months, so just very grateful to be back out on the ice."

There's no doubt in saying that Campbell means a lot to this team, both on and off the ice. Having him back will certainly help out the Bruins play, and boost their spirits. Zdeno Chara, the Bruins Captain, weighed in on seeing his beloved teammate back out there:

“Obviously a tough end of the playoffs for him - we all missed him, he’s such a great teammate," Chara told Caryn Switaj of BostonBruins.com  before the game. "He recovered so well and he worked so hard to be back so he wouldn’t have to miss any games or time from the beginning of the season, and he did a tremendous job to be able to be in great shape. He’s such an important part for our team; it’s hard to replace guys like that."

Soupy will be returning to his "fourth line" role alongside Carl Soderberg and Shawn Thornton. I hate to call it that, because it really isn't a fourth line at all, but that's what it's listed as... technically. Anyway, it's great to Soupy back out there, Go B's.

*As usual, feel free to leave a comment below to join the conversation*