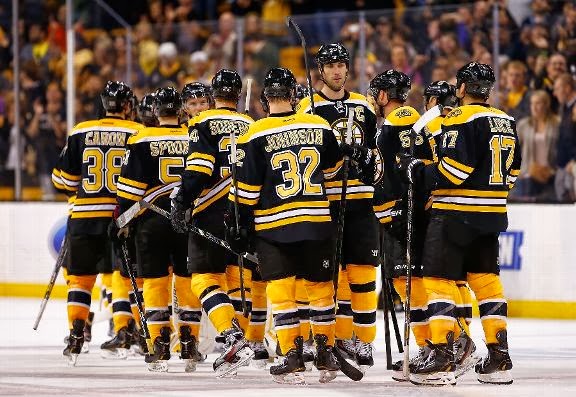 While it's true that the 2013-2014 NHL season is still several days away, it's never too early to start thinking about which teams will walk away the Stanley Cup champions. About which team will put their blood, sweat and tears into 82 regular season games, and push their bodies and minds to the limit in four rounds of excruciating playoff action. It's never too early to think about which team is shaping up to be a well oiled machine, running on all cylinders and combining all of it's parts to churn out a team with the intestinal fortitude that will bring a Cup to the hometown they proudly display across their chest. There is only one team in the NHL that has the character, star power, athleticism and leadership that is required to hoist that 34.5 pound silver chalice overhead, and that team is the Boston Bruins.

The Bruins had a busy summer, where they said goodbye to familiar names the fans had grown to love. Nathan Horton opted to sign with the quieter, “family friendly” city of Columbus. Andrew Ference was not needed on the Bruins bench any longer and signed as a free agent with the Edmonton Oilers. Jaromír Jágr continued on his journey to play for every major NHL team (isn't that what he's doing?) and hoped on board with the New Jersey Devils, and the teen heart throb Tyler Seguin finally reached the end of the road with his behind the scene antics and inconsistent game play and was shipped to the Dallas Stars. While at first glance these departures may seem like a giant blow to the Bruins roster, the fans should not fear; with change comes opportunity, and with opportunity comes Stanley Cup championships. With the familiar faces leaving, we must turn our attention to the new faces joining us. Jarome Iginla and Loui Eriksson are two players that, on paper, are perfect pick ups for Boston, and can only add to the stacked team that made it to the finals in 2013. While Horton fared a little bit better than Iginla number wise in the post season (which could be contributed to the fact the Bruins played more games in the post season, not to mention swept Iginla's previous team the Penguins in the Eastern Conference Finals), Iginla's numbers in the regular season prove to be better. It also should be noted that Iginla isn't suffering from any nagging injuries that could take him away from the game such was the case with Horton, who now has to worry about re-occurring concussions as well as his shoulder that was repaired during the off season (which, coincidentally, happened during a bout with Iginla). While the numbers Eriksson and Seguin put up for the 2012-2013 season are similar, it should be noted that it appears this past season was uncharacteristic for the former Dallas Star. The three previous seasons before the 2012-2013 season, Eriksson was mighty close to putting up 30 goals, as well as tallying close to 50 assists. Perhaps being part of a team that was not a playoff contender for so many years finally started to put Eriksson in a lull, and as a result, his performance suffered. It's been evident in the past that elite players stuck on lackluster teams often flourish when finally placed in an environment that allows their excellence to be showcased and rewarded with playoff appearances (Example: Nathan Horton), and it is exciting to think Eriksson finally has a proper place to shine with the Bruins. It is expected that Eriksson will contribute as well as be more consistent and productive than Seguin, with less of the headache that Seguin brought with him. His immature and often questionable antics in his personal life reflected badly on himself as well as his team (reportedly staying out late partying in Toronto during playoffs/wearing the same clothes to practice for three straight days, not being able to handle living on his own while playing hockey overseas during the lockout, having to be closely monitored so he wouldn't go out and party before playoff games), and is an issue that will not have to be worried about with Eriksson. These new additions, as well as needed subtractions, will aid the Bruins on making it to the Finals where they belong.

While the Bruins have been struggling with finding and executing their power play for what seems like years, this pre season has been an early indicator that our problems may be solved. In the five pre season games played thus far, the Bruins have scored 15 times. Out of those 15 goals, a whopping seven have come on the power play. While that doesn't seem like a very large number, compare it to the 18 power play goals the Bruins scored over the course of the entire 2012-2013 season, and you can see where I'm coming from. Iginla has 165 career power play goals under his belt, which is the most anyone on the Bruins roster has scored throughout their career. While it certainly doesn't hurt having Iginla on the power play, where he looks more than comfortable perched above the left face off circle, he isn't the only person contributing to the facelift the power play is seeing. It appears as though everyone on the PP unit has more urgency in their game, using quick and simple plays as opposed to over thinking and taking a painful amount of time setting them up. The versatility being used during the power play is refreshing as well, as was evident in the Bruins 3-2 win over the Capitals the other night. Zdeno Chara scored two goals on the power play over the course of the night, one being a tip in in front of the net off of a Dennis Seidenberg bomb. It also doesn't hurt to have Tory Krug in the mix, a young man who showed in the playoffs that he has quick hands, a strong body, and a knack for setting up plays from the point. So far the Bruins look confident, poised and in control on the power play, which should end up ranking them higher than last year (tied for 25th in the NHL) and send them to the playoffs ready to take home the cup.


Tuukka Rask had a heartbreaking end to the 2012-2013 season, allowing two goals with only 76 seconds left in game 6 of the Stanley Cup finals, and allowing the Chicago Blackhawks to walk out of the Boston Garden the champions. While it was a devastating loss, and I'm admittedly one of Rask's biggest critics, his heroics throughout the post season cannot be ignored. Rask stepped up and took over the role of starting goalie after the departure of legendary Tim Thomas, shoes that could never truly be filled by any goalie who will ever play the game in a Bruins uniform again. Rask stood tall between the pipes, and while he did not have an extraordinary regular season, he truly stepped out into the spotlight during the post season. He finished second and first across the board when it came to statistics, and throughout the first 13 games of the 2012-2013 post season, he matched (and even surpassed) Thomas' numbers during his Stanley Cup winning 2010-2011 run. The memory of Rask standing stunned in his net as the Blackhawks celebrated their game winning goal in game 6 is something that will never leave Bruins fan's minds, but along with that memory is the memory of the Bruins sweeping the ever dominating Pittsburg Penguins. And along with that memory is the memory of man handling the New York Rangers and nearly sweeping them as well. Rask has showed his fiery emotions on the ice before, and it's no secret that he is as competitive as they come. Entering the 2013-2014 season it would not be surprising to see Rask use the Stanley Cup final loss as motivation, and to see his competitive nature turn him into a man possessed for the season that lies ahead. Tuukka Rask wants to be in between those pipes proving himself more than any other goalie out there, and wants to be the reason why Boston brings home another championship.

Most of the players on the Boston Bruins roster are no stranger to the post season. 12 members on the current roster were part of the 2010-2011 team that brought home the cup, and several more played smaller roles in the playoffs in the seasons following. These men know what it takes to get to the Stanley Cup final, and also know what it takes to seal the deal and become the champions. While there are a few young guns on the roster, they will not lack direction or structure. The core of the team are in their middle to upper 20's and have been in the game long enough to guide the newer additions, and should be able to help them adjust nicely. The Bruins have slightly rebuilt certain aspects of their team over the off season, but do not be fooled; the team is not in any type of “rebuilding” period. Simply put, the parts of the machine that were no longer working to the best of their ability were replaced with better, more efficient parts that will make the machine known as the Bruins run smoother. This team has seen success and has also seen failure, and has learned from both experiences. With that core group still on the ice wearing black and gold, they will pass their knowledge along to the new faces, and will carry on towards the grandest prize of them all: the Stanley Cup.