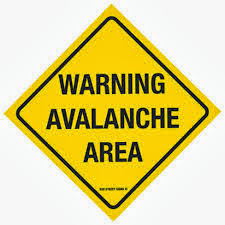 (Signs point to challenging conditions for Thursday's match-up with Colorado.)
{Photo via www.allposters.com}

Fans of the Boston Bruins are all too familiar with first-year Colorado Avalanche head coach and vice-president of operations Patrick Roy. From 1985 to 1995 Roy donned his #33 jersey and patrolled the crease for the rival Montreal Canadiens. Although the Hockey Hall of Famer often got the best of the Bs in the regular season during that decade, the Bruins buckled down when it counted most and eliminated Roy and the Habs during four out of five Stanley Cup playoff series from 1987 to 1992. The 3-time Conn Smythe winner was part of "Le Trade" in 1996 and spent the remainder of his career in net for the Avs until his retirement in 2003. Though he was most often the recipient of boos and jeers from the Garden faithful, it is hard to deny his intensity as a player and his drive for success. He was a member of four Stanley Cup Championship teams (two in Montreal and two in Colorado) and his jersey has been retired by both franchises.

Now he returns to Boston in coaching attire as bench boss of the Avs, who are off to a surprising 3-0 start. Roy has partnered with former Colorado teammate and now team Executive Vice-President, Joe Sakic, to bring a new hockey attitude to the Mile High City. Coach Roy's infusion was instantaneous. The Avalanche opened the 2013 campaign with a 6-1 drubbing of the Anaheim Ducks on home ice. Although the offensive output was impressive most attention focused on Roy's antics at the conclusion of the game. The Avs head coach was upset with an apparent knee on knee hit inflicted on their #1 draft pick, center Nathan McKinnon. Ducks' coach Bruce Boudreau and Roy exchanged pleasantries between benches with rookie coach almost knocking the glass separating the two into the Anaheim bench. If his mission was to fire up a young team and incite an already raucous crowd, old #33 had succeeded. 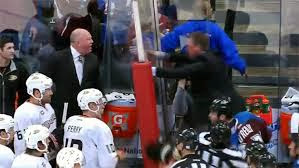 (Avalanche head coach Patrick Roy getting his point across.)
{Photo via www.cbc.ca}

The fire and energy of the Avs opening night victory has carried over to a physical 3-1 triumph over the Nashville Predators and a well played 2-1 win over the previously unbeaten Toronto Maple Leafs last night. Colorado sits atop the Central Division at 3-0-0 with a +8 differential and a wave of early season confidence. Ron Knabenbauer, beat writer for the Avalanche website explained the buzz: "For the first time since the team moved to Denver in 1995, Colorado is off to a 3-0-0 start." Coach Roy added, "This is what the team is about right now. Everybody is chipping in." Defenseman Cory Sarich notched his first goal against the Leafs and offered his take on the fast start stating, "It's just more momentum on our side. We have to keep working on things, we have to stay grounded. We'll enjoy [the win] for a minute."

All momentum comes to an end. The surprising success of the Avs comes on the heels of a last place finish in the Western Conference in 2012-13. The Bruins 2-0-0 start is less of a surprise to hockey insiders and fans alike after last season's Stanley Cup run. Colorado will be bringing its youth movement to the TD Garden with the likes of PA Parenteau (leading scorer), Nathan McKinnon (#1 draft pick), Gabriel Landeskog (NHL's youngest capatain) and Ryan O'Reilly (rugged shooter). Will Boston's younger players answer the bell on Thursday night? Torey Krug and Dougie Hamilton have the opportunity to establish themselves as two of the best up-and-coming defensemen in the league. What better way to make their case than to shutdown Colorado's young guns. 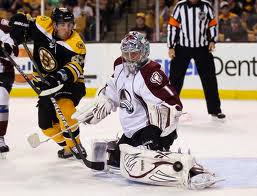 (Brad Marchand puts the puck on a sprawling Semyon Varlamov.)
{Photo via www.zimbio.com}

Boston will rely on the more even-keeled temperament of Coach Claude Julien and focus on what has worked best: total team hockey. Expect Patrice Bergeron, David Krejci, Milan Lucic and Brad Marchand to break out against the run-and-gun Avs. Too much push by an over-aggressive Colorado offense could result in open ice opportunities breakdowns in the opponent's team defense. Avs goaltender Semyon Varlamov is currently matching numbers with Tuukka Rask. Varly is 3-0 with 91 saves, 3 goals allowed and a .967 save percentage. Rask owns a 2-0 record with 69 saves, 2 goals allowed and a .966 sp mark. Both goalies should keep their fair share of pucks out of the nets.

This early season battle of unbeatens offers some interesting story-lines. Can the upstart Avalanche continue their winning ways? Will the Bruins continue their expected march to another Stanley Cup run? I believe the answer can be found in the prophetic words of Patrick Roy at his retirement press conference on May 28, 2003. When he was asked if there was anyone he feared when playing he responded that there was no one he feared, but that Cam Neely had given him some trouble. Mr. Neely will be in the building Thursday night and I anticipate that his Bruins will be providing plenty of trouble for Coach Roy. 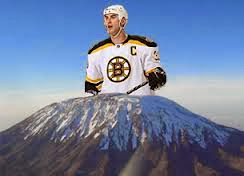 (Chara looks to stop the momentum of the Avalanche.)
{Photo via www.sports.yahoo.com}