Bruins vs Avalanche: Keys To the Game 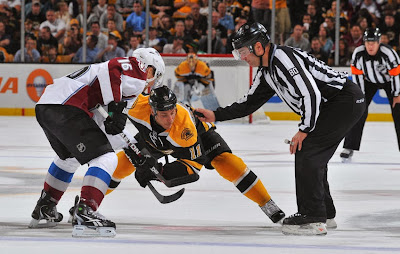 The Bruins have played excellent in the past two games and now they look to the third game of the season. The team they're going up against? The Colorado Avalanche. The team Ray Bourque won a cup with because we couldn't get him one.

The Avalanche have been in the rebuilding process for a few years now. They have added young star talent in Matt Duchene and Gabriel Landeskog and this past year they drafted Nathan Mackinnon. They hired Patrick Roy as their head coach and so far Roy has been a sight to see behind the bench.

For the Bruins to beat the Av's they just need to follow these two keys:

1) Capitalize On Power Play. Its a rare occurrence for Boston Bruins fans. We have seen the Bruins perform on the power play. It's almost as rare as seeing Tampa Bay fans go to a baseball game. Or any sporting event really. So the Bruins need to keep the success going for as long as they can. It looks like they can with the help of Torey Krug who has a goal and an assist on the power play already this season.

2) Shut Down Top Lines. The Av's aren't a deep team at all. They have tremendous talent on the top two lines though. With Gabriel Landeskog, Matt Duchene, Paul Stastny, Ryan O'reilly, and Alex tanguay the Av's top lines are deadly. The Bruins need to continue their shut down defensive style.