Bruins vs Penguins: keys to the game 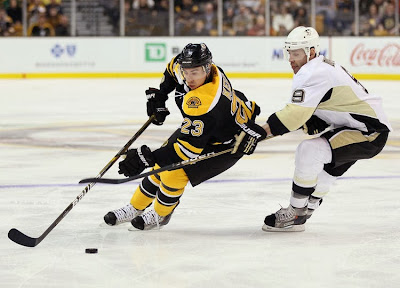 Tonight the Bruins will play the team they beat last year in the Eastern Conference Finals the Pittsburgh Penguins. The Bruins didn't just beat the Penguins, they shut them down, and swept them in four games.

The Bruins took advantage of the basket case known as Marc-Andre Fluery during the series and then capitalized on a mediocre Vokoun for the rest of the series. The Bruins were able to shut down Sidney Crosby and Evgeni Malkin so the Penguins barely made a dent in the scoreboard.

1) Crosby & Malkin. The Bruins were able to shut down Crosby and Malkin by making sure Seidenberg and Chara were on the ice when they where and that Bergeron was able to go up against Crosby. Tonight the Bruins will have to try and get the right players on the ice against Crosby's line and Malkin's line.

2) Fluery's Folly. Marc-Andre Fluery has been known to choke in the post season. In the regular season though Fluery is a serviceable goalie and so far this season has a 8-2 record and a 1.79 GAA. The Bruins know that they can take advantage of Fluery and his weaknesses.