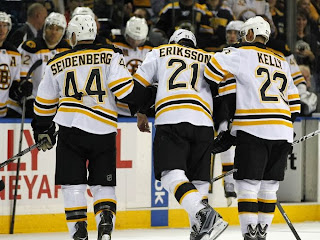 Bruins forward Loui Eriksson, whom, as you probably know, suffered a concussion via John Scott of the Buffalo Sabres, is not expected to join the Bruins on the ice for any of this week's three games. He joined the Bruins at Ristuccia Arena, the Bruins Practice Facility in Wilmington, Mass. today, but isn't ready to return to the ice yet. B's head coach Claude Julien seemed unsure of when the new Bruin will return to the lineup, but he did seem to be on the positive side of things.


“He’s doing better,” Julien said after practice, (via ESPN.com.) “The one good news is he showed up this morning, came by and that’s usually good news when a guy can leave his home and come to the rink. We’re taking it day by day with him. I think right now, you’re not going to see him for the next week, and I don’t think he’ll skate in the next week. We can put it at that stage for now.”

With an injury such as a concussion, it's tough to predict exactly when Loui will return, however, today's comments by Julien sounded of improvement from Saturdays after the Bruins disappointing loss to New Jersey, when Claude said:

“Loui’s doing OK, I guess, for a guy who suffered a concussion,” “It’s the same thing — you have a good day, you have less of a good day — and it’s early on but we’re just, like always, you keep your fingers crossed that it’s going to get better sooner than later for his sake.”

John Scott's in-person hearing is scheduled for Thursday, where he will meet with the Department of Player Safety regarding the hit, and further punishment (keep in mind Scott's job on the Sabres, with six season, nearly 200 games, but only a single goal, and four assists. Oh yeah, and 319 penalty minutes, and counting). Scott, who is known to be a goon, has since been suspended indefinitely. Claude Julien, who is obviously not a fan of Scott's commented on the hit after the game (and what a great job he did).

The guy that did it, did his job tonight I guess,” Julien said. “He’s only out there
for two reasons: to fight, and hurt.

Here's Scott tageting Loui Eriksson from a distance (notice how Eriksson is already getting rid of the puck). 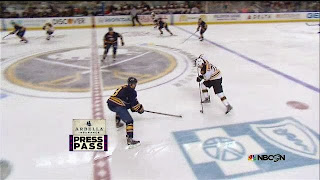 (And here's the hit. Penalty much?) 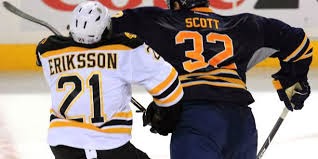