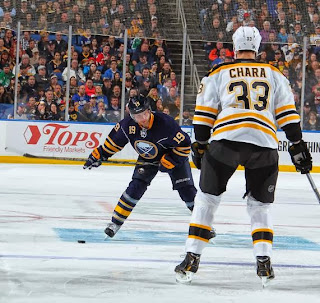 For the first time this season the Boston Bruins are going to face their "rivals" the Buffalo Sabres. Last season the Sabres went out of their way to sign tougher players because they have to play the Bruins so often. Unfortunately for Buffalo, their team has fallen off the map, so adding those guys doesn't matter anymore.

The Sabres have been awful so far this season posting a 1-8-1 record. The Sabres are looking to trade their corner stone pieces Ryan Miller and Thomas Vanek for young elite prospects and because the Sabres are in re-building mode, their lineup is filled with youth. The Sabres have 3 players that are 19 years old and one player that's 18 years old.

With that said the only pressure that should be on the Bruins this game is avoiding embarrassment. If the Bruins lose this game to the Sabres they will be laughed at by the entire league. Its not that important but its something to think about.

1) Ryan Miller. Though the Sabres are an unimpressive team, they do have a savior. Ryan Miller is one of the best goalies in the League and will probably represent the United States in the Olympics. Despite a 1-6 record, Miller has a 2.73 GAA and a .926 save percentage which isn't awful considering the team that's thrown out in front of him. So the Bruins can't get cocky because Miller always has the potential to shut them down.

2) Continue to Dominate. The Boston Bruins are probably single handedly responsible for taking the physicality and manhood out of Tyler Myers. Myers is soft now and he generally looks paranoid playing the puck almost anywhere on the ice. With all the young talent the Sabres have in the game tonight, the Bruins need to show them whose boss.