Do you want a Goon? You Scott it. 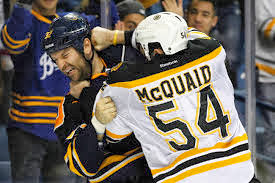 (John Scott of the Buffalo Sabres faces on-ice justice at the hands of Adam McQuaid after his late hit on Loui Eriksson during 3rd period action last night.)
{Photo via www.theobserver.com)

Goon. Type the word into the Google search engine and you will receive the following result: "a bully or thug, especially one hired to terrorize or do away with the opposition." Goon. Refer to the Merriam-Webster dictionary and discover this definition: "a person who is hired to threaten, beat up or kill someone." Goon. Hockey fans are accustomed to the term and may substitute names like enforcer, fighter, tough guy, pest or agitator in its place. Regardless, in Boston today the word "goon" is associated with one man - John Scott.

After the Bruins had notched their fourth goal of the game in the third period last evening in Buffalo to extend their lead to 4-2, Scott took aim at Loui Eriksson on a blind-side, elbow-raised hit. The impact sent Eriksson to the ice leaving him motionless and moved Bruins' defenseman Adam McQuaid into protection mode. McQuaid engaged Scott along the boards and landed his fair share of punches in retaliation for the unprovoked and completely unnecessary hit. Instigator and fighting penalties were assessed to McQuaid while Scott received a match penalty and was removed from the game. Eriksson left the ice shakily under his own power with the assistance of Bruins' teammates. He remained in a Buffalo hospital after the game for observation and did not return to Boston with the rest of the Bs. As of the time of this post no formal update has been given on Eriksson's condition.

The hit itself was disturbing to watch and infuriating to comprehend. Bruins fans immediately flashed back to the infamous Matt Cooke hit on Mark Savard. It is impossible to not draw similarities. That cheap shot effectively resulted in the end of Savard's NHL career. Cooke became Public Enemy #1 in Boston and drew the ire of the league for other incidents of questionable intent. His career continues in Minnesota and he has seemed to turn over a new leaf in response to multiple suspensions and fines at the hands of Brendan Shanahan and the NHL's Department of Player Safety. Mark Savard has not had the opportunity to continue. What does this latest episode of on-ice negligence have in store for the two players involved?

In researching John Scott to write this piece I visited the Buffalo Sabres website. The image posted of Scott is an automatic indication of what his role is with the team. See for yourself.

(John Scott - the picture speaks for itself.)
{Image via www.buffalosabres.com}

The cameras for the NHL on NBC zoomed in on Scott as he settled into the penalty box temporarily after his dust up with McQuaid. Scott could be seen mouthing the words "Head shot? Head Shot?" while offering a dismissive grin. Yes, John... Head shot. Scott's career NHL numbers are reflective of his obvious purpose to any team for whom he has played. He has played in 187 games scoring one goal and notching 4 assists. He has tallied 324 penalty minutes and has only one shot on goal his season. Mike Ross, the host of "Hockey This Morning" on NHL Network Radio stated "He has a career average of 7 minutes and 11 seconds of ice time per game. He does not contribute to that team for any purpose other than one role." Bruins Coach Claude Julien remarked after the game that "It's unfortunate but the player who did it did his job tonight. He's out there for two reasons and that's either to fight or to hurt. He did his job tonight." 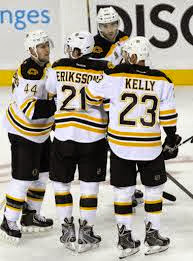 (Loui Eriksson is assisted of the ice after being on the receiving end of Scott's cheap shot.)
{Photo via www.ca.sports.yahoo}

Scott has been asked to attend an in-person hearing with the NHL Director of Player Safety Brendan Shanahan. This usually implies that a minimum of a five game suspension will follow the meeting. Scott has no prior history of discipline with the league and has never been suspended. Denis Potvin, NHL Hockey Hall of Famer and 4-time Stanley Cup Champion, was a guest on "Hockey This Morning" and mentioned that "He (Scott) is not a repeat offender." Potvin observed that "over $800,000 have been handed out in suspensions. Something is wrong here." Mike Milbury and Keith Jones offered their perspectives on the incident following the game on the NBC Sports Network last evening calling for both Scott and Sabres coach Ron Rolston to be held accountable by the Buffalo management and the NHL. The video below shows their eloquent offering.

The NHL walks a fine line in its effort to promote the game of professional hockey. Last night's game was a perfect example of this. The NBC Sports Network has dubbed Wednesday night as "Rivalry Night". Scheduling has been arranged so that mid-week matches pit teams with rough and tumble pasts against one another. A pre-game rivalry video segment highlights bloody battles and heated contests of previous years to amp up the excitement for the upcoming game. Last night the ghosts of hockey past showed up in flesh.

What do we want as fans of hockey? We want hard, clean checks by enforcers. We want fast paced action, blistering shots on goal, acrobatic saves and crisp tape to tape passes. We want shouting between benches from one pest to another, purposeful pushing and shoving between agitators and the occasional drop of the gloves to settle differences by two team tough guys. But we don't want cheap shots and late hits from goons. We don't want to see elite players or any players for that matter being helped of the ice or carted off on back boards because of reckless, dirty play. Forget penalties and fines and suspensions. Allow the enforcers to enforce, the fighters to fight, the pests to be pesty, the tough guys to show their toughness and the agitators to irritate; but get rid of the goons. Get rid of John Scott, his one shot on goal, his measly 7 minutes and 11 seconds per game and eliminate his type from the NHL for good.