Three Concerns For the B's 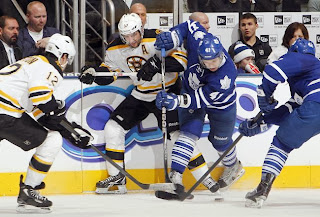 You have to be impressed with the way the Bruins played in the first two games and especially how they played against the Detroit Red Wings. The third line has been stellar compared to last season and the rest of the team has followed suit.

So what then can possibly be of concern for the big bad Bruins? Well first lets look around the league. And we don't have to look very far.

Toronto Maple Leafs: Yes, the Toronto Maple Leafs. You read that right. The Boston Bruins need to be concerned about the Leafs. Why? After taking the Bruins to the brink of elimination in the first round of the playoffs, the Leafs went out and made their roster even better then it was last year. They added a 30 goal scorer and a very physical hockey player in David Clarkson and traded for Stanley Cup Champion center David Bolland. The Leafs are already 3-1 and have looked great. The Bruins aren't playing scrubs anymore.

Soderberg: Soderberg was going to start the season on the third line but unfortunately for him an injury saw Caron take his spot. Even worse for him, Caron and the third line combo have been tearing it up. So what now? If the third line is this successfully on a consistent basis then would Soderberg be ok with going to Providence or sitting games out when he could be a star back in his homeland? Who knows.

Chad Johnson: The Boston Bruins were the second team in New England to sign a Chad Johnson. But this Chad Johnson is an NHL goalie. A goalie who doesn't have the stats to support his new role. The Bruins are very confident in their farm system and especially their goalies. So why would the Bruins keep Johnson who himself only had 10 NHL starts and send down Niklas Svedberg? Last AHL season Svedberg was the best goalie in the league with a 37-8-2 record, a 2.17 GAA, and a .925 save percentage. I'm calling it before it happens, which means I might end up being really wrong, but Johnson is going to lose the backup job to Svedberg.

So what do you think Bruins fans? Tweet @bruinslife with your opinions.