Bruins vs Blue Jackets: keys to the game 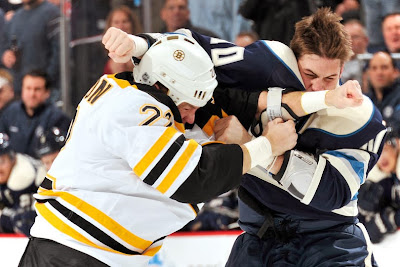 The Boston Bruins are ready to face off against the Columbus Blue Jackets. The Blue Jackets are 6-10-1 and are 8th in the Metropolitan Division. Its been a disappointing season for the Jackets and the Bruins are looking to capitalize on that.

The star of the Blue Jackets, Marian Gaborik, has 5 goals and 6 assists so far this season. Its not awful, but for him, its very disappointing. Another star hasn't been living it up for the Jackets either and that's Vezina goalie winner Sergei Bobrovsky.

Bobrovsky has posted a 2.88 GAA and a .909 save percentage. Again its not awful but for a former vezina winner, its extremely disappointing. The Blue Jackets need Bobrovsky to be at the top of his game to win and make the playoffs.

1) Gaborik. Marian Gaborik is a huge threat for the Bruins. The Bruins need to make sure they shut down Gaborik because the game can get out of hand if he gets hot. The rest of the Blue Jackets are mainly grinders and two way forwards so the Bruins can turn this into their style of game, a grind fest.

2) Time To Fight. The Bruins need to get physical in this game and rough up the Jackets. It'll be a good game for the Bruins to build some more confidence as the season starts to thicken. With Jared Boll the best fighter on the Jackets, maybe Thornton can step up and fight him.