To Shootout or not to Shootout? 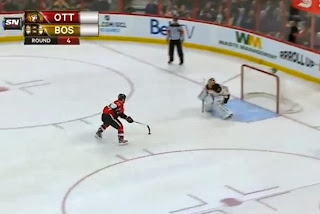 To shootout or not to shootout, that is the question. At this week’s General Manager Meetings, taking place in Toronto, discussions will be held about what should be done with the NHL’s overtime format. Needless to say, this isn't a new conversation. Many players, alongside many fans, experts, etc., believe that the shootout really doesn’t represent the game being played. Well, I really can’t help but to agree.
I’ll say right out of the bat that I both support, and believe that the overtime format needs to be changed, and I think it will…Here’s why. Hockey is a team sport. The game is based off of the idea of working together as a whole to accomplish a common goal. That is hockey. But that is not a shootout. In fact, the shootout is quite the opposite.
With a shootout, you have a handful of guys, the most talented at beating a goaltender on the team, taking turns coming in alone on a defenseless goalie. One could argue that, in many cases, the goalie is a sitting duck. And that one move he makes decides the entire game. Here we have a team sport being decided by one player in a situation that doesn't represent the game at all.
Plus, if I were a defenseman in the NHL, I would be furious. You just worked your butt off the entire game to sit and watch your teammate waltz in alone on a goaltender. Hockey is largely a defensive game, and once again, in a shootout, that is not being represented at all. There is literally no defense. Nil. Nada. Zilch. The entire game is being decided by the ability of a single player to beat a goaltender in a situation which you would never see during standard play. It’s not offensive skill; it’s the ability to beat a lonely goalie.
People want to see the overtime format represent the game that they just witnessed. In a true hockey play, a player doesn't have all day to dilly dally from side to side at a half a mile an hour while stick handling. It doesn't happen. And yet, this is how we've been deciding between a win and an overtime loss, a vital point that can make or break a season.
And as funny to watch as it was, this shouldn't decide a game…

It's kind of surprising that the shootout system was passed back in 2005. I believe that this is an example of the NHL being a business. To the fans, it was exciting. They would pay for the chance to go see a shootout, because it's a very adrenaline pumping, unique environment. It was the league trying to sell tickets to fans. And it still is exciting, but to be honest, it's not the right way to decide a game. Save it for the skills competition.
Okay, so enough of my rant. Now the question is what should be done. People have been tossing around a variety of options, ranging from extended overtimes, to new overtimes with different amounts of players (3 on 3 overtime for example). It's a tough decision, especially since the league seems to feel that they have gotten it wrong in the past.
Right now, it seems that there are a few formats that the league will consider. First of all, there's a rather simple proposition. Just plain out extending the overtime period. Ten minute OT (4 on 4, like the current OT format). Or perhaps, adding another five minute overtime period, this one being 3 on 3. Milan Lucic played under these conditions in the British Columbia Hockey League (this format added a skater during penalties, rather than removing one). He feels that this would be a good fit for the NHL, according to CSNNE's Joe Haggerty.


“You feel like it’s almost fitting that it ends that way, rather in the shootout. It’s definitely something I would be in favor of,” Lucic said. “A five minute 4-on-4 and then a five minute 3-on-3 would be really exciting, and cool to watch. Hopefully they do something where we can get it done in overtime rather than a shootout.

“I remember that nobody ever came off the ice and was like ‘that’s so stupid that we lost it 3-on-3’ [when they got back to the dressing room]. Your chances were always pretty good to score. It was just a matter of who was going to score first.”


This format would create a lot of room on the ice, and would encourage a very quick and offensive playing style, one that goalies may not be too fond of. But then again, I bet they'd like it a heck of a lot more than the shootout. Bruins goaltender Tuukka Rask, like many other goalies, isn't a very big fan of the shootout.

“I wouldn’t mind [getting rid of the shootout,]” he said. “It doesn’t have anything to do with the game you just played. It’s just so dramatic when you lose. As a goalie it’s tough to accept that it’s not all your fault if you lose. I don’t know. As a viewer I’m a fan of the shootout, but when you’re in it, it’s not that cool, especially when you’re on the losing end. A five- or 10-minute overtime? I’d be OK with that. But going to 3-on-3 [in overtime] … that sounds a little crazy to me.

“They’re trying to make these new rules every year, it seems like. Whether it’s goalie pads or [smaller] nets, or whatever. I wouldn’t be surprised if we play 2-on-2. It’s not good for the fans if teams are playing it safe at the end of the game just to get to the shootout, so I’m all for overtime and going 4-on-4 to try and go for it.”

Yes, a 3 on 3 change may sound a but radical to some people, but it's an option. So now it's our turn to wait and see what the league decides.

What do you think the OT format should be?
Let us know in the comment section below.