Bruins vs Blues: keys to the game 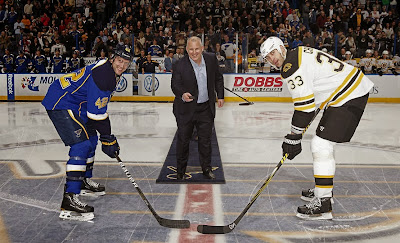 Tonight the Bruins and Blues are going to face off in one of the most anticipated games of the season. The Blues are one of the best teams in the NHL and perhaps the very best in the West. The Bruins of course have built themselves into the beasts of the East. An epic match up.

The St. Louis Blues are stacked. They have built there team from all aspects, trade, draft, and free agency. The Blues also have the leading NHL goal scorer in Alexander Steen. With players like Steen, our old friend Sobotka, Oshie, Backes, Berglund, and Roy the Blues have a ton of firepower and inter changeable pieces that can play both center and wing.

The Blues also have an amazing defense and great goal tending. The Blues anchor on defense is Alex Pietrangelo. Pietrangelo has 4 goals and 12 assists but is even more important to the Blues defensively. Of course the Blues have two great goal tenders in Halak and Elliot. Which ever one starts tonight will give the Bruins a lot of trouble.

Keys:
There are no keys this game. This game we should see the Bruins play at their most elite level and the same with the Blues. It should be a great game, a classic, and maybe even a preview of the Stanley Cup Finals.