If you were hoping to go to the Winter Classic this New Year’s Day in Michigan to see Detroit take on Toronto but you don’t have tickets yet, you better hit up SubHub.com because they are sold out. Announced on Tuesday by Red Wing’s executives they are officially sold out, but that some single tickets are still available. I think that all translates to, don’t get your hopes up if you want to hit up the box office between now and game day. They are expecting a crowd of 107,000+ at this season’s annual New Year’s Day game at Michigan Stadium which will break the record for attendance for a hockey game set at that very stadium in December 2010 at 104,173. That record was set by Michigan VS Michigan State where Michigan fans were happy to sit in the cold for the game as the Wolverines blanked the Spartans 5-0. 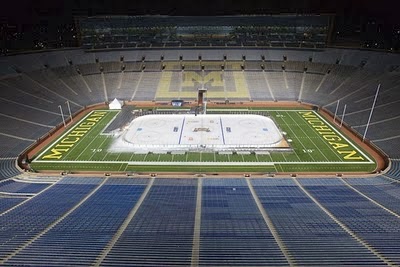 Can’t go to the Winter Classic but want to go to an NHL game in an outdoor arena? You’re in luck because there are still plenty of outdoor games on this season’s NHL schedule. None of which feature our beloved Bruins so they probably won’t be that great anyway so don’t kick yourself if you can’t make it to any of them. In addition to the Winter Classic, there are five more outdoor games thanks to the Coors Light NHL Stadium Series putting on four of the five starting with a great hockey rivalry in the great hockey city of Los Angeles between the L.A. Kings and Anaheim Ducks at Dodger Stadium on January 25th followed by a red eye to New York for two games at Yankee Stadium. They will feature the Rangers and the Rangers against the Devils on the 26th and the Islanders on the 29th. The final game for the Coors Light NHL Stadium Series will be in Chicago at Wrig- oops nope, Soldier Field where the Blackhawks will take on the Pittsburgh Penguins on March 1st. 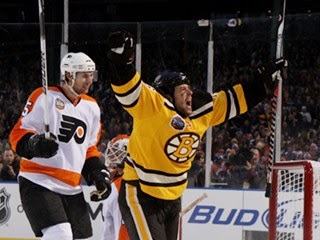 The last of the outdoor games on the schedule will be the day after the Hawks/Penguins on March 2nd at BC Place in Vancouver. The Canucks will play the Ottawa Senators in an event dubbed The 2014 Tim Horton’s NHL Heritage Classic.

So fear not if you won’t be able to make the sold out Classic, there is plenty of opportunity to freeze your ass off while watching the best game in the world.