Bruins vs Islanders: keys to the game 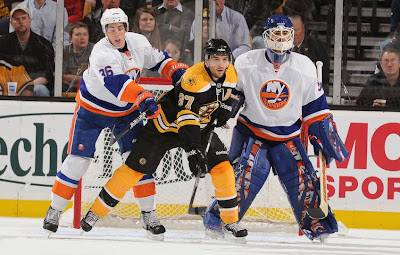 Its the day of the Red Sox parade but it doesn't end their for Boston sports fans. The Bruins and the Islanders will square off tonight in New York for the first time this season.

The Islanders are 5-5-3 and recently shocked the NHL in acquiring Thomas Vanek in a trade with the Buffalo Sabres. The Islanders gave up two picks and Matt Moulson in the deal. The trade seemed to benefit Buffalo more than New York though. What New York did recieve though is a mentor for John Tavares and a player who can score 40 goals.

Tavares is the Islanders ultimate threat. The 23 year old kid has 5 goals and 9 assists in 13 games. His new counterpart Thomas Vanek only has 4 goals and 6 assists but on a team that actually has some offensive talent, Vanek can flourish.

2) Top Line. The Islanders top line is now really scarey due to their scoring potential. It will take a lot for the Bruins defense to stop both Vanek and Taveres. But they are going to have to shut them down to slow down the Islanders offense.