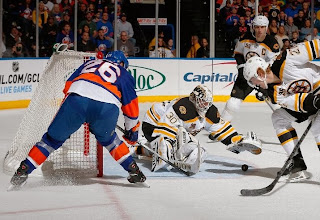 The Bruins have hit the first patch of rough waters in their new season.

The New York Islanders kept the Bruins stuttering on Saturday night, as they dropped the B's 3-1 at the Nassau Coliseum behind goals from captain John Tavares, Andrew McDonald and newcomer Thomas Vanek.

Islanders goalie Kevin Poulin faced 27 shots, shutting the door on about half a dozen premium scoring chances the B's had throughout the game. The story of this match-up is the Bruins inability to put home their chances. Either by ripping their shots just wide of the net, hitting the post or having it smothered by Poulin, the B's just couldn't shoot the puck straight and on target tonight.

Its another game of struggling play from the Bruins, as going back to last Thursday versus the Sharks, the team has not particularity played well. It took a goal in the last seconds to snatch the win from San Jose, the Bruins blew two two goal leads versus New Jersey, played from behind all game and lost to the Penguins in Pittsburgh, and just barely squeaked by the Ducks on Halloween night.

The Bruins have been stuck in second gear through all of these games; the Islanders played with more energy and more speed almost the entire game. There was not a real stretch of play where you can point to and say the Bruins outplayed New York.

Doug Hamilton got the lone goal for the B's in the second on the powerplay after a pileup in the crease led to the tap in, with Reilly Smith and Ryan Spooner recording the assists. The goal came just two minutes after McDonald made it 2-0 for New York, so it was rather timely to catapult Boston back into the game.

But just 40 seconds later, the B's got sloppy in all three zones, and newly acquired winger and B's killer Thomas Vanek ripped home a cross-ice pass from Kyle Okposo to put the Isles back up by two. Doug Hamilton got caught badly out of position, and Zdeno Chara couldn't break up the pass to Vanek. And Vanek 1-on-1 will not miss many of those chances.

That would be the final score, as neither team potted any goals in the third frame.

It has been a troubling stretch of play for the B's, as coach Claude Julien was getting on them a bit this past week for their lack of energy and finish. Needless to say he again will not be too pleased with tonight's effort and result.

As has been the case the past three weeks, the B's will have the rest of the weekend off leading into Tuesday night, where they will welcome the Dallas Stars into the Garden, and host the return of Tyler Seguin.