Bruins vs Leafs: keys to the game

The Leafs have been impressive this season posting an 11-5 record and made some great additions in the off season. The Leafs acquired David Bolland from the Stanley Cup champion Chicago Blackhawks in a trade and then in free agency signed David Clarkson. The Leafs also improved their goal tending core trading for LA Kings goal Jonathan Bernier.

With the same cast that got them to the playoffs last year, and some new additions this year, the Maple Leafs are a big threat for the Boston Bruins.

1) Leafs Depth. Not only do the Leafs have great goal scoring ability in Kessel and Clarkson, the Leafs have built up enough depth to combat the Bruins deep lines. All four Bruins lines have to skate a good game because if one line is off than the Leafs can jump on that weakness. The Leafs have also become much tougher and are hard to intimidate now. Clarkson is a tough player and the Leafs have Frattin and McLaren to rough up the Bruins players. Its going to be a tough game.

2) Rebound City. The Leafs have good goalies but they both have one big downfall. Rebound control. Both Reimer and Bernier give up a lot of rebounds so the Bruins need to look for those and capitalize. 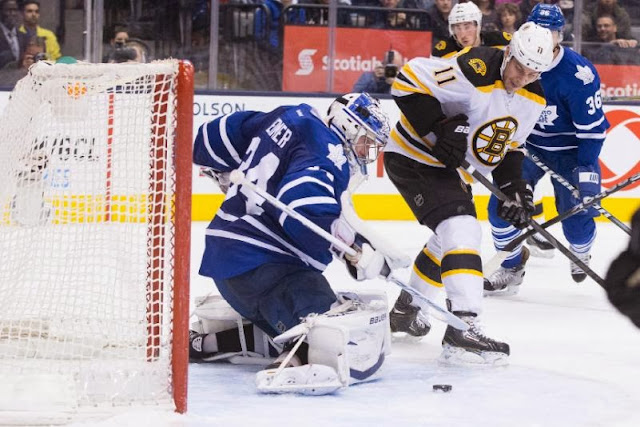