It is unclear what the need is for Boston as there has been no announcement on injury for either regular goaltender Tuukka Rask or his backup Chad Johnson - though forward Nick Johnson and defenseman David Warsofsky have been sent down to Providence, Johnson in anticipation of the return of Daniel Paille from a mild concussion. 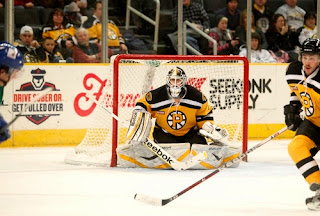 It had been speculated that Warsofsky had been sent down to make room for injured defenseman Dougie Hamilton's return, but the Svedberg call up adds a measure of ambiguity to that scenario - though it is possible that another roster move could be in the offing.

Svedberg won the Bastien Memorial Trophy as a rookie last season in Providence, given annually to the top goaltender in the American Hockey League as voted on by coaches, players and media in all 30 AHL cities and it was thought that the 24-year-old would earn the backup job to Rask in training camp, but Johnson emerged with the job.

It's possible that the Bruins will go into Friday night's match with the Ottawa Senators with Svedberg getting his first ever NHL start, as the Swede joined the team on Friday morning and is eligible to play against the Senators.