Bruins vs Sens: keys to th- Svedberg? What are you doing here? 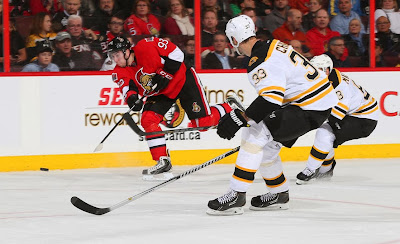 The Senators are in Boston to take on the B's who made a surprise call up today, goalie Niklas Svedberg. Many were suprised the Bruins even ever signed Chad Johnson given Svedy's success in the AHL (goalie of the year last year). The kid will get his chance to shine soon.

Though it probably wont be tonight. The Bruins admitted that nothing was wrong with Chad Johnson or Tuukka Rask stating simply that they wanted to get a look at Svedberg. It only makes since. Julien said that Svedy wont start tonight but might be in net tomorrow night in the away game against the Sens.

So how are the Sens? Mediocre. Which is upsetting and surprising. The Sens are very respectable competition compared to Montreal and Pittsburgh (dare I say likeable?) but they have struggled as of late posting a 4-3-3 record.

Karlsson vs Krug: Erik Karlsson is one of the best offensive minded defenseman in the league and was a big part of the Senators turn around. But now the bruins have their own Karlsson, his name is Scorey Krug. Krug is only two goals away from Karlsson and the best part? Krug can actually kill penalties unlike Karlsson.

Depth and Defense: The Senators like most teams in the Atlantic have tried to build their team like the Bruins, with defense, depth, and strength. The Senators actually have the coach and the player depth to play that type of game. If the Sens make a few moves theyll start to win, and as of now, they are still a very tough team to face. The Bruins are going to have to face a team very similar to them.