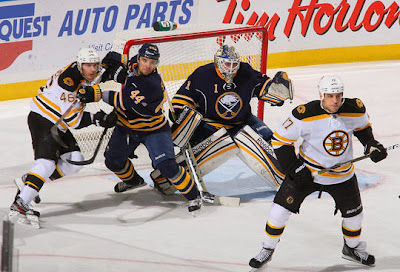 The Bruins are coming off of a disappointing loss to the Buffalo Sabres in a game where Chad Johnson realized he is just a backup goalie. A rap around goal from under achieving Drew Stafford was like a knife in the heart for the Bruins and they lost 4-2.

Tonight though Tuukka Rask will most likely be in net and the Bruins will most likely put forth a better effort in hopes to bury Thursday nights loss in the rear view mirror. Except for Marchand. Marchy had his best game of the season, scoring two goals, and the Bruins need him to continue that style of play. The Bruins wont want Marchand forgetting Thursday nights game anytime soon.

1) Miller? Miller Is Golden: As long as the Buffalo Sabres have Ryan Miller in net, they have a chance to beat you, even with the embarrassment of a rebuild process playing in front of him. Thursday night Miller was able to keep his team in the game and it payed dividends.

With Miller in net its always about quantity over quality so the Bruins need to take as many shots as possible to wear Miller down and hope one or two get by early.

2) Exploit The D: In Thursday nights game it felt like the Bruins didn't do enough to exploit the Sabres very weak defense. Its true that the Bruins have lost a lot of speed, but they still have guys like Krug, Smith, and Spooner who should be able to blow by the Sabres D-men. It'd be especially nice to see Krug put one in the net tonight.