Opinion: Thomas made a choice as an individual, now he must pay the price

Tim Thomas takes exception to many things, so it's not surprising that the often crotchety, outspoken and politically motivated former Bruin would take exception to someone being in his crease...

...and taking exception to a team with a four goal lead trying to pot one more, as long as they'd scored six against him already.  So when Bruins' winger Carl Soderberg crashed the net with just seconds left in a rout at TD Garden on Tuesday night, he made a choice as an individual to smack him over the head with his stick. 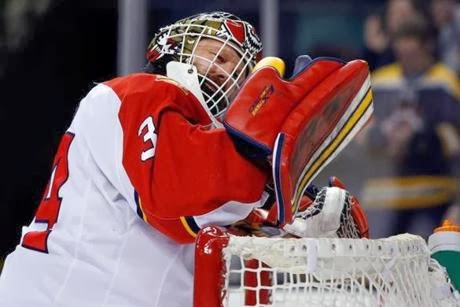 Thomas is revered throughout New England, stemming from his four years as the goalie at the University of Vermont and his seven years as the stopper on the Dirty Water ice.  People who bring championships to Boston instantly become icons and are given great amounts of latitude for behavior - and just about anything will be forgiven...

...unless that "anything" is swinging a thick, blunt goalie stick like an Headsman's axe at the head and neck of a current Bruins' player - or any player at all, for that matter - and it really doesn't matter what your excuse is.

“Nobody was really running into me, until the end there,” Thomas remarked after the game “Soderberg, the play before that, he did a pretty hard jab and then all a sudden the pucks up in the air, you’re catching it and his stick is in my throat."


"With less than a minute left in the game and they’re up by four goals, 6-2, I took exception to that." he continued, "But other than that, I didn’t notice. That’s the way the game is played nowadays. Guys are in and around the crease.”

Um, news alert, Timmy:  That's the way the game has always been played - and the fact that you didn't notice until the score was 6-2 says everything that Brendan Shanahan should need to know:  Your team was getting steamrolled, an opposing player crashed the net and you threw a fit.

In fairness, Thomas has always been a good teammate and was in all likelihood standing up for them by showing them that he's not going to stand for another team running the score up on them, but much like all the times that the equally crotchety New England Patriots' coach Bill Belichick runs up the score on his opponents, the message from the Bruins was clear:

You don't want us to run up the score, then stop us.

“We can’t stop play because there is 30 seconds left," Soderberg said after the game. "we have to try to score the whole game.”

That's Boston Bruins' hockey - you should know this.  Don't like it?  Then stop them, just don't do it by bashing one of their players over the head with your stick.

In January 2012, Thomas refused to visit the White House with the rest of his Bruins' teammates at the traditional meet and greet that President Barack Obama hosts with the winners of the Stanley Cup, issuing the statement:

"today I exercised my right as a Free Citizen, and did not visit the White House. This was not about politics or party, as in my opinion both parties are responsible for the situation we are in as a country. This was about a choice I had to make as an INDIVIDUAL."

Whacking Soderberg over the head with a blunt instrument was a choice you made as an individual as well - and while President Obama had no recourse as to allow you your right, the National Hockey League's Director of Player Safety doesn't have to be so politically correct.