Big and Bad is back: B's rediscover their physicality en route to 4-1 win over Wings

That is the Bruins team we all expected in the postseason.

After opening the 2014 Stanley Cup Playoffs with a dud on Friday night, the Bruins found their lost identity and reestablished their trademark physicality to trounce the Red Wings 4-1 at the TD Garden and tie their Divisional Semifinal series at one game a piece.

Justin Florek, Reilly Smith, Milan Lucic and Zdeno Chara all scored for the Bruins. Tuukka Rask turned aside 34 shots in the contest.

Boston laid 33 hits in total on the Wings, with Johnny Boychuck leading the way with five, and Chara and newly-returned Kevan Miller right behind him with four a piece.

The Bruins special teams were outstanding, going 2-4 on the powerplay and 4-4 on the penalty kill. Both Smith and Chara scored on the man-advantage.

The series now shifts to Detroit for Games 3 and 4, which will be played on Tuesday and Thursday, respectively.

After getting outworked and outhustled on Friday, the Bruins made sure to not repeat the effort in Game 2. The Black and Gold came out flying, putting the Wings on their heals and giving them the momentum immediately in their favor.

The rediscovered jump in their step paid off, as the Bruins scored twice in the first 11 minutes of play.

Justin Florek, who everyone had pegged as the player to score the first Bruins goal of the 2014 playoffs, did just that, firing home his first-career postseason goal at 7:28 of the first period. Wings goalie Jimmy Howard played the puck way out ahead of his crease and tried to hit Brendan Smith, but the puck hit off of Smith's skate and right to Florek on the forecheck, who rifled home into the open net.

Reilly Smith doubled the lead three minutes later at 10:35 jamming home a loose puck on the powerplay that had squeaked through the pads of Howard with some help from Loui Eriksson. Patrice Bergeron's shot from the blueline hit the mass of bodies in front before Eriksson got a touch of it and pushed it through Howard's pads. Smith swooped in from the side and put the puck home.

Things got nasty for the first time in the series towards the end of the period, with Brad Marchand
and Danny DeKeyser both went off for roughing after Howard covered the puck in his crease. Both players went off for matching roughing penalties.

At the end of the first, things again heated up, with Johan Franzen, Greg Campbell and Johnny Boychuck getting into it on the endboards behind Tuukka Rask. Zdeno Chara and Brendan Smith broke away from the pack and almost dropped the gloves, but Chara showed his amazing restraint in holding back in the fight, and instead resorted to punching Smith in the face and asking him repeatedly if he actually knew what he was getting himself into. It produced one of the more entertaining moments thus far in the series. And it solidified the truth that the Bruins' physicality was getting to the Wings. 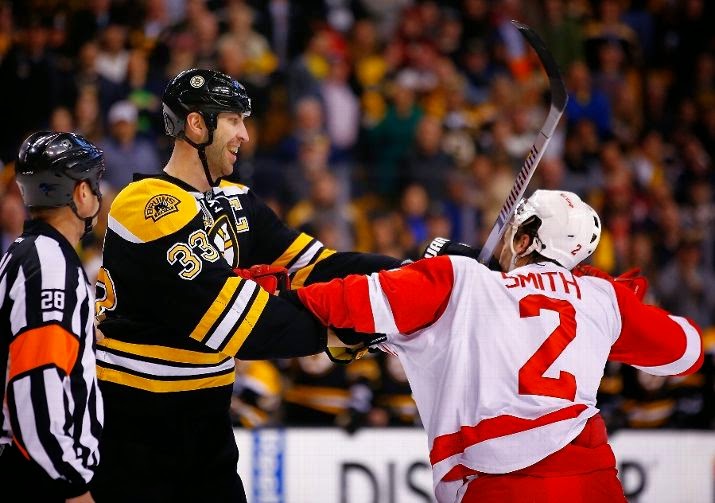 The Bruins held the 2-0 lead until 13:20 of the period, when Luke Glendening was in the right place at the right time to get the Wings on the board. A Darren Helm wrist-shot from just inside the faceoff circle deflected off of Glendening's hand and into the net. A quick video review confirmed the motion was not deliberate, and the Wings had their first goal of the day past Rask.

After getting outplayed for the first 25 to 30 minutes of the game, the Wings had turned the play around and began to get take it to the Bruins and their defense. Their improvement in play resulted in the goal and a 13-6 shot advantage for the period, and for more than a minute it felt like the Wings were on the cusp of leveling things up and turning the afternoon right around.

But the Bruins made sure it never got to that point, and instead turned the tide back in their favor, culminating in Milan Lucic's goal at 18:16 of the period. Torey Krug hit Lucic at the Wings' blueline and he passed over to the streaking Jarome Iginla. Lucic broke the other way and turned Brendan Smith inside-out and received the pass from Iginla. Howard got the stick on Lucic's shot, but it wasn't enough to keep it out of the net.

The Bruins entered the third up 3-1, and they added their fourth and final goal on the day when Zdeno Chara jammed home another powerplay goal just 2:27 into the period. It was again Iginla who was involved in the scoring play, as Howard wasn't able to corral his initial shot, and Chara was on the spot to the side of the crease to slip it past Howard.

The Bruins and Tuukka Rask kept the Wings off the board for the rest of the game, as Rask made 13 saves in the period and 34 overall in the game.

Where the Bruins were unable to gain any sort of traction or establish any kind of consistency in their play in Game 1, Game 2 Sunday afternoon was an entirely different story. The Bruins came right out of the gate with a fire lit under their backsides and took the game directly at the Wings, outshooting Detroit 18-10 in the frame. The Bruins managed 25 shots on goal in the entirety of Game 1.

Going down 0-2 and losing both games on their home ice was not an option for this Bruins team. We knew it, Claude Julien knew it, and the players knew it. They made sure to put the disappointing Game 1 a million miles behind them, and they did just that.

The difference between Friday night and Sunday are day and night. The Bruins corrected their mistakes from Game 1 and made sure to not repeat their faults.

The series is tied at one game a piece, with Game 3 coming Tuesday at Joe Louis Arena in Detroit.