It's playoff hockey time! Who's ready?!?! (Everyone is ready, duh, it's playoff hockey). With the NHL's 2014 Bracket Challenge, tons of people, including myself, filled out a bracket according to what they think will happen in the next few weeks.

Here's my bracket, with the number of games it will take each team to rise to victory in the quarterfinals, as well as the total number of goals in the Stanley Cup Final, let me know what you think! 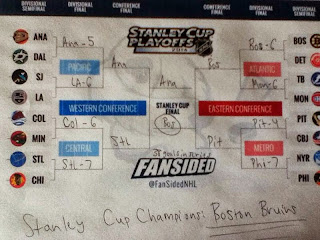