Montreal Canadiens goaltender Carey Price will be forced to watch the remainder of the Eastern Conference Finals from the box seats, after sustaining an injury in a collision with New York Rangers forward Chris Kreider. As seen in the video below, Kreider slips through the Montreal defense, and walks in on Carey Price, where he is taken down and goes crashing into Price, who took a hard blow.

Some Canadiens, like Dale Weise, believe that the collision was purely accidental.

“The guy’s lightning fast,”  Weise said. “He’s big, he’s strong, he doesn’t go easy. I think he’s going so fast there. He’s kind of like a deer in headlights. He had to pull up quick. I don’t think there’s anything wrong with it.”

Canadiens Head Coach Michel Therrien has different feelings, which has sparked a bit of a war between the two teams. Therrien said:

“Really disappointed, Obviously, he’s our best player."... “Put it this way, he didn’t make much effort to avoid the contact,”

Former Ranger, and current Canadien Brandon Prust also feels that Kreider may be to blame for the injury:

“I don’t think Kreider ran him, but he didn’t do anything to avoid him. Whether it’s on purpose or accidental, he ran him pretty hard, and everybody thinks it was accidental, but we call it accidentally on purpose.” 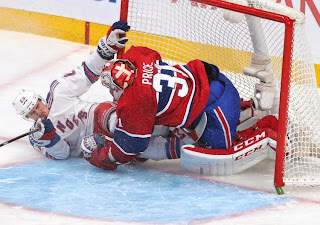 He also took another clear shot at Kreider, saying “We’re in the N.H.L. He should know how to fall.”

Whether or not the Canadiens actually think this, or are just using the statement as a rally cry is left for you to decide, but either way, the Rangers responded. New York Head Coach Alain Vigneault said:

“Everybody’s entitled to their opinion,” Vigneault said. “I tend to believe a 2-0 game, guy going on a breakaway, he’s trying to score.”