Claude Giroux arrested, put in jail for getting drunk and repeatedly grabbing a cop's butt 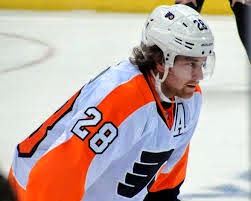 So uhm... yeah, that happened. No but seriously... what the hell. Flyers superstar Claude Giroux spent Tuesday night in jail after after an incident with a Canadian police officer. According to the report, Giroux was detained for "“repeatedly grabbing the buttocks of a male police officer."

No this is not The Onion, this is a legitimate news source. We aren't joking... seriously. It's being strongly assumed that alcohol played a major role in the ordeal.

The Ottawa police have yet to release a statement regarding Giroux, who is expected to be released without criminal charges, however, Flyers General Manager Ron Hextall commented on it through Twitter, saying:

"We are aware of reports surrounding Claude Giroux. Until we have more information, we will withhold making any further comment." -Hextall


The Flyers captain scored 28 goals and tallied 58 assists last season, finishing third in Hart Voting. He's also probably the first guy to get locked up in Canadian Jail for getting drunk and repeatedly grabbing a cop's butt.