Doc Emrick, Legendary Broadcaster And The "AND IT WOULDN'T GO" Guy, Is Gone. #ThankYouDoc 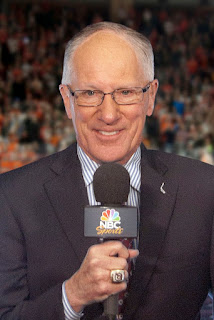 Legendary Broadcaster Mike "Doc" Emrick has announced his retirement from broadcasting, which means the legendary voice behind "AND IT WOULDN'T GO" is... gone.
Here's his call of Tim Thomas' save of the year on Steve Downie in game five of the 2011 Eastern Conference Finals:
Thanks for all the good times and great calls, Doc. And on behalf of everyone even tangentially associated with the National Hockey League, we're all terribly sorry you ever had to work on a network called "Versus."
Oh, and if you liked THAT miracle stick save in the playoffs from an eventual Stanley Cup Champion, and you liked the call by Doc Emrick, here's pretty much the same save (from Braden Holtby of the Capitals in the 2018 Final) with practically the same call by Doc:
Thanks for everything, Doc. You're already in the hockey hall of fame for your legendary broadcasting career, you deserve all the praise you are likely to receive in the coming days and weeks, and let us be the first perhaps to also congratulate you on being, almost certainly, if such a thing exists, the holder of the Guinness World Record for most instances of saying the word "ladles" when not talking about soup.
-----------------------------------------------------
Gear up in our online store