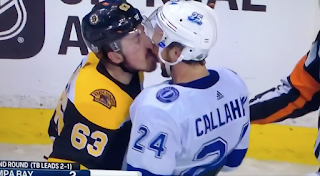 I'll say it.
Back in 2018, when Canadian Folk Hero Brad Marchand was out there licking and kissing guys, I absolutely loved it. Hilarious, irreverent, an amazing distraction, and the purest example of psychological warfare in hockey since the fictional Reggie Dunlop chose to remind Hanrahan that his wife didn't only fancy the fellas. (Headphones up if you click that link, it's from SLAP SHOT after all) For those who have for some reason forgotten, back in 2018, Brad Marchand took Reggie Dunlop's advice to heart. "You gotta twist em, f**k with em!"
Let's taste take a trip down memory lane, shall we?

Here's the thing.
Was Marchand hurting anyone?
Nope.
Was he injuring anyone?
Nope.
Was there a rule against this?
Not really. Unsportsmanlike conduct, MAYBE. On the face of it, what he was doing with this licking and kissing routine wasn't really that different, from a pure rules perspective, than your average, time-honored face wash. From the extraordinarily fun 2008 Dave Caldwell column on the history of the facewash, which is really worth a full read if you missed it:

Zajac ground the palm of his left glove into Hatcher’s face with such force that Hatcher bit him (Zajac’s version) or the glove hooked onto Hatcher’s teeth (Hatcher’s version). Zajac, who had to have his middle finger stitched, did not deny that his face wash, often referred to as a stinky glove by players, goaded Hatcher. “You don’t like to get it done to you,” Zajac said recently. The face wash is a baiting tactic that has been around since gloves were invented, or, as the Devils television announcer Chico Resch said, “since hands were invented.”

What Marchand was doing wasn't run of the mill agitating, although it worked perfectly in that context. What he was doing was next level trolling not just of his opponents, but of an entire hockey culture that even in 2018, still hadn't quite made up its mind on what to think about homosexuality.
Back when I was a kid in 1980's suburban Massachusetts, my attitudes about gay people were pretty well shaped by the culture at large, and while there was never ill intent, I certainly don't look back on them with pride. Gays were weird and funny and bad, but it was easy to think that, because pretty much, they didn't exist in real life to me. The only place I'd expect to encounter a gay person was in the punchline of a Truly Tasteless Jokes book, or from an over-the-top swishy character from a Mel Brooks film. In the early '80s, it would have been just as bizarre for me to come across an openly gay person in real life as it would have been to encounter a Polish guy who was actually dumb. I didn't have anything against gay people any more than I actually thought that Polish people were less intelligent, but that was just how the jokes went, and hey- the jokes were funny enough. Did you hear the one about the Polish guy who locked his keys in his car? He had to call the police to get his family out. Ha ha ha. Of course, the tragedy of it is, OF COURSE I knew gay people back then, I must have. And OF COURSE I knew Polish people back then, I just didn't know it, and I cringe at what they must have thought about some of the things that casually came out of my mouth.
Back in 1982, if I'd been playing pond hockey and some kid came up to an opponent and started licking or kissing him in a scrum, it's not hard to imagine what the response would have been. A homophobic slur, followed by a fistfight, and whoever it was that had done the licking or kissing would have been permanently tarred as a "faggot" for the rest of his time at whatever middle school he was attending. Of course, since I didn't know anybody at the time who openly identified as gay, calling a kid that word certainly didn't define them as a person who fell in love with a member of the same sex. It just meant they were deviant, and to be avoided. An antisocial sort of person who didn't act like a man was supposed to act, which, to my mind at the time, was a pretty bad thing to be.
So when Brad Marchand, in 2018, started licking and kissing opponents to get under their skin, you could tell from the broadcaster's comments that maybe they weren't so sure what to think either. In the above YouTube clip, Don Cherry, to his credit, thinks it's hilarious. Around the :26 second mark, in the midst of laughing so hard he can't even properly explain Marchand's actions, Cherry says "the reason he does this is...what are you going to do, drop the mitts?" Instinctively, (and perhaps impressively for him) Cherry understood that reacting with violence to something that many might perceive as an act of love between two men might absolutely not fly in 2018. You can hear in his voice how much he loves Marchand for finding that area of discomfort and exploiting it.
But some of the announcers later in the clip don't seem to be as certain of how to address it. At the :58 second mark, we hear an announcer react to Marchand by saying  "One shudders to think what Mike Milbury would have done if someone would have done that to him in the middle of a playoff game."
His inference is clear, and it's no laughing matter. He's suggesting that Mike Milbury would have done exactly what would have happened in my pond hockey game from the 1980s. And where Marchand's brilliance lies is exactly there. You can't punch a guy in the face for being gay and you rightly shouldn't. But on the other hand, it's ENTIRELY gross to get licked, and how the hell are you supposed to react? The answer is, OF COURSE it's ok to punch someone in the face who licks you or kisses you during a hockey game, he's basically face-washing you with his mouth, which is super gross, and that behavior honestly demands a punch in the face.
But culturally, you have to stop and think about what you're doing in that moment, and that is where the trolling genius lies. Marchand was displaying some very 21st-century values with that move, values that dictate that he had absolutely no problem doing something that might get you called gay, and why? Because it's 2018, dummy, and there isn't anything wrong with being gay. And if YOU think there is something wrong with it, then doesn't the problem lie with you?  This is a level of trolling that is fully intended to inspire a homophobic reaction, and if and when it does, it says more about the person reacting than it does about the person who inspired it.
And in case it wasn't crystal clear that Marchand knew exactly what he was doing, check out this clip when he's asked about why exactly he licked Komarov:

"I thought he wanted to cuddle," Marchand explained. "I was just trying to get close to him."
Silence from the reporter pool.
Reggie Dunlop couldn't have done it better.
The NHL, for its part, eventually did the expected, obnoxious thing, and instead of allowing Marchand to hilariously continue to force hockey culture to examine their own hangups on homosexuality, they told him in no uncertain terms to knock it off.
Of course, when it comes to evolving views on homosexuality in the wider culture, the NHL has made impressive and admirable steps. The You Can Play Project, precipitated by the extraordinary life and tragic death of Brendon Burke sends exactly the right message, and just off the top of my head, I remember the Chicago Blackhawks going out of their way to be inclusive of the gay community.
This week was National Coming Out Day, and it's impossible to overstate how much the culture has changed for the better around homosexuality since I was a kid. For one thing, people CAN come out, or at least I hope they're in a place where they feel like they can. Gay weddings are now just weddings, and here's hoping they stay that way. Not only do I know gay people who've gotten legally married, I even know a few people who've gotten gay divorced. And why the hell shouldn't they? None of it changes my life. The jokes change, I guess, and so it's on me to look a little harder at the things and people I joke about to make sure that the laughs aren't based on assumptions that I literally know nothing about. The real trick isn't looking backward and acknowledging that I was perpetuating hurtful behavior, it's looking at the present and determining if my casual behavior hurts someone I never think about at all.
And hey, it's also worth mentioning that the NHL did such a great job in holding a Stanley Cup playoff tournament without a single positive Coronavirus test that in that bubble, they actually could have returned to letting Marchand lick as many people as he wanted and be none the worse off, at least from a viral perspective. And so yeah- I'll know Coronavirus is really over when they let Marchand start licking guys again, and this time with fans in the seats. But the real question is, even if they did look the other way on Marchand licking people in 2020, would a provocation like that from an athlete in Marchand's position still be effective trolling? Would it still poke a homophobic sore spot in hockey culture? Sadly, it probably would. Because if there wasn't a problem with homophobia in the culture, Marchand's behavior would never have struck the chord that it did.
So here's hoping that soon, Bruins fans can not only return to a game where from a public health perspective, Brad Marchand can lick everyone in sight, but from a cultural perspective, he'd choose not to; because the confusion such an act would inspire would have nothing to do with who some people fall in love with, and exclusively because Good God, what a nasty thing to do.
-----------------------------------------------------
Gear up in our online store