Bruins In NY For Labor Meeting 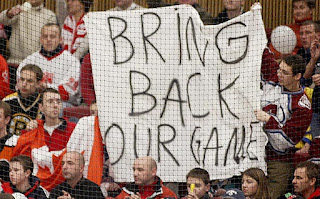 ESPN-Boston Bruins defenseman and former NHLPA player rep for the team Andrew Ference tweeted Wednesday that a lot of players traveled to New York City for NHLPA meetings. "We have the whole team on the train down to NYC, even picked up an Oiler, Coyote, Penguin and Predator. #theplayers," Ference posted on Twitter early Wednesday afternoon. The Bruins reportedly had the largest showing of any NHL team.
N
Despite the players showing up to the meetings, early reports still point towards a lock-out. However Milan Lucic is optimistic that by the players going down to New York it shows that they want to play.


"It's good that a lot of guys are going to find out where we're at as a union. We're going to have some long meetings tonight and tomorrow morning, and we're going to get more clarity of what to expect over the next few weeks...With all of the players showing up, it shows that we're against the lockout and we want this game to grow and continue. It's no secret that the game has grown tremendously over the last few years and it's headed in a really good direction. [Union head] Don [Fehr] is very black and white with us, so we know exactly what's going on. The large attendance in New York City really shows our solidarity."

I really hope the NHL and NHLPA can resolve the conflict and we can have hockey start up in the next month. The players clearly put their hearts and lives into the game, and it is a shame that the owners are trying to screw them over. I posted a video a while back, if you have some free time you should check it out.